The Duties of an Ordained Minister 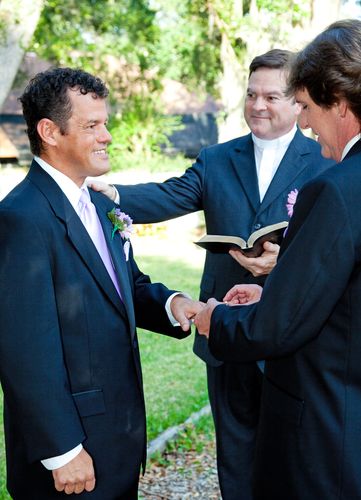 Becoming an ordained minister is a necessary step if you plan on officiating a wedding. Thankfully, the application process is typically quick and requires very little effort. Still, it is important for officiants to have a firm understanding of what their roles entail. Whether you are concerned about what's considered appropriate for ordained minister clothes or you’re not sure what to say during the ceremony, there are plenty of questions that you must answer in advance. Review this guide and learn more about the duties of the ordained minister in the wedding process.

Working With the Couple

Usually, the easiest way to figure out what your role is in a wedding is by discussing the topic with the couple. While there are some responsibilities that an officiant will always be held accountable for, a majority of the details of the ceremony will revolve around the couple’s wishes. Certain people might prefer the officiant keep their words brief, while others may wish for a little extra from the ordained minister speech. Having a direct chat with the couple clears the air of any possible misunderstandings.

Another key duty of the officiant is performing the actual ceremony. As mentioned, the couple will dictate the specifics of how the event is conducted. Still, you will be responsible for creating the actual text for the wedding. A ceremony speech needs to hit key points for the union to be considered legal, so you don’t want to come unprepared and simply make it up as you go along. The best way to get an idea of how to write an ordained minister script is by looking at some examples.

The internet can be an invaluable resource for ministers who are just getting started. Look at templates of traditional wedding ceremonies and see if they can provide you with an easy blueprint to follow when creating your speech.

On the legal side, officiants are responsible for handling a few important documents. Before the wedding is conducted, local laws might require the officiant produce credentials proving he or she is sanctioned to perform weddings. While this is not the case everywhere, being prepared is better than being caught by surprise. When you become ordained, you are given the option of ordering an ordained minister package that includes all of the documents you might need to produce to satisfy the clerk’s office.

The minister must also complete the marriage license following a successful wedding ceremony. Typically, this involves signing your name in a few locations and can be finished in a few minutes. To guarantee the license is properly filled out, meet with the couple immediately upon the end of the event. Some couples might ask the officiant to return the completed paperwork to the local offices, so be prepared to get the documents where they need to be without delay. As long as you have your ordained minister titles and license information, the rest is easy.

Though having your minister title is important, officiants must also be ready to control the crowd at any given moment during the ceremony. Whether the couple is running late or your planned speech isn’t landing the way you’d hoped, surprises can appear out of the blue and require you to think on the fly. You control the mood of the crowd as you conduct the wedding, so learn about different ways to keep the mood light in the chance that something goes awry.

The role of an ordained minister might seem complicated at first, but it is quite straightforward when you take a closer look. Review your duties and get excited for your chance to showcase your skills at your first wedding.