What Can A ULC Minister Do Once Ordained? 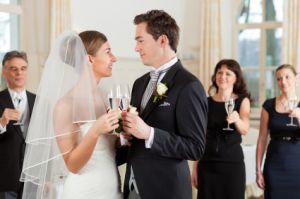 For the most part, the men and women from around the world who get ordained online through the Universal Life Church can do many of the things "conventional" ministers do in the United States. This is because our church is, in fact, a real, bonafide church like any other traditional body and our ministers are thus real, bonafide ministers.

With a ULC ordination, any one of our ministers can...

Many people who are called to the ULC as a result of its overarching mission of spreading universal brotherhood and sisterhood will find themselves at some point asked to perform wedding ceremonies for friends, family members, and occasionally even complete strangers. Many people who are unfamiliar with the ULC assume that the nature of our instant online ordination would not allow these weddings to be legally-recognized, but they are wrong. In fact, ULC ministers are able to officiate weddings in 47 US states. In short, our ordination is considered to be "legal" in the vast majority of the US.

Before you perform a wedding, make sure to contact the county clerk of the county where the marriage license is going to be filed to make sure that they accept our ordination and, if they do, ask about what forms of ministerial documentation you will need to show them in order to file for the license. Any type of documentation they mention can be found in the Minister Store section of this site.

You can learn more about performing weddings, as well as any other ceremony, by visiting the Minister Training section of the site.

Beyond officiating a wedding, probably the best way in which people who get ordained online through the ULC can touch the lives of others is to work as a chaplain in a prison or hospital. Sick and dying patients in hospitals around the country have been comforted by our church's members, and prison officials actively encourage those who are eager to bring religion to others to come to their institutions and rehabilitate their inmates. Many ULC ministers have been called to do this work, and, thanks to their online ordinations, are able to receive permission to do so. Please contact your local hospital or prison after you get ordained to see if you can provide these valuable, life-changing services there.

Preside Over A Funeral

Certain states, like New York, only allow ordained ministers to have bodies released from morgues for the purposes of using them in burial ceremonies. These states generally see people who get ordained through the ULC

as meeting this requirement, and our ministers are thus frequently able to preside over funerals there.

Some ministers also choose to use their online ordinations to perform baptisms for the children of friends and family members. Baptisms are not governed or regulated by the government, of course, so you will not need to get permission from any government entity to perform one.

In our training section, you will also find helpful guides on how to perform a baptism.

I have been ordained since 2013 . Can I mentor individuals?

You can do that without an ordination.

Can a ULC Minister Ordain other ministers if they have ULC Church?

Can one "bless" things if ordained?

You can do that even if you're not ordained :)

I was employed as a full time licensed massage therapist in CALIFORNIA from 1996 until 2006 when I moved here to MASSACHUSETTS, and have not pursued my MT license here due to financial and time restraints. If I become ordained through the ULC will I be able to legally touch people and perform massage?

Thank you in advance for your assistance with this matter.

Being professionally ordained through the Universal Life Church gives you the legal responsibility and privilege to practice as just that, an ordained interfaith minister. You can serve as an Imam, Rabbi, Chaplain, etc. etc. It does not give you however, the legal right to practice as a massage therapist or herbalist, etc. To protect yourself from possible legal implications and your ordination license, I would recommend you obtain you Massachusetts license. If you decide not to obtain it and perform under the credentials of an ordained minister, you could possibly face legal difficulties, and even possibly have your minister's credentials revoked, not to mention the Commonwealth of Massachusetts could also revoke your future to practice as a therapist. Better to take the safe the road and obtain your license.

Good luck to you and Warm Regards, ~Chaplain Joseph Freas

Hello I wanted to know that I am now ordained can I start my own ministry along with counseling married couples and people individual along with giving back to the less fortune like feeding them and providing them with clothes and personal hygiene and shelter needs along with starting my own wedding chapel and outreach ministry can i start a nonprofit or for profit business and how do I address myself to people and are we allowed to do housing blessing ,church visit and blessing over sick patients

Hello Shirley, it is my belief that you may do all these things in accordance to federal, state and local laws.

Hello Shirley, I am interested in starting a nonprofit ministry specifically to offer food and needed items, as well as pet items to help ease the non-housed burden. I was wondering if you have began working with the non-homed and if so did you need a 501c3 along with your ordination. I am just searching for help by way of information. Thanks, Tamela

Since I am Ordained though the ULC, as of 7-18-2018, could I mix and match clerical clothing, like say, could I buy a skufia, Zuchetto or biretta and/or a Cape, Ferraiolo, Greca, Cincture, Ect... If they do not have the ULC Brand-name/logo on them. Would this still be legal?

So Does this mean i Have certain rights for traveling and border crossing?

I had a similar question as Betty. Can I Ordain others using the ULC Platform/Website and have it be something that counts under MY Interfaith Ordination work?

I need to know if you received my purchase

if we are ordained through ULC can we be considered a "faith leader"?

Besides funerals and weddings what else can an ordained minister do