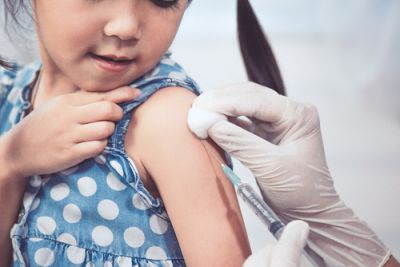 Now, however, many states are rethinking their stances on this issue, including the following:

Many people believe that the vaccination controversy has far more to do with the anti-vaccine personal preferences of some parents than it has to do with the religion, if any, to which they adhere.

In fact, with the exception of the Church of Christ, Scientist (Christian Scientists) and the Dutch Reformed Church, no major religion strictly forbids vaccinations. Nevertheless, some specific congregations, most notably fundamentalist Christian, ultra-Orthodox Jewish, and Amish ones, interpret their religion’s teachings in ways guaranteed to prohibit vaccinations.

Whether or not vaccinations represent a legitimate religious freedom issue, there’s no question that they represent a huge public health issue. Vaccines have virtually eradicated the following diseases that used to take millions of lives and produced grave illnesses, some with lifetime consequences, in those who survived:

Public health experts say that when parents refuse to vaccinate their children, some of these diseases can crop up again in epidemic proportions. For example, they point to the measles outbreak earlier this year in New York City’s ultra-Orthodox Jewish community that resulted in at least 764 confirmed cases. Mayor Bill de Blasio declared a public health emergency and closed several yeshivas (Jewish schools) in an effort to prevent measles from spreading even more than it already had.

Those opposed to religious exemptions to childhood vaccinations point to the necessity of “herd immunity” (i.e., the need for an overwhelming majority of people to be vaccinated so as to protect the community as a whole). Without mass vaccinations, the diseases that they prevent can spread like wildfire, especially among school-aged children who spend considerable time in close proximity with other kids.

In places like California, which rescinded its religious and personal exemptions for vaccinations following the 2014 Disneyland-linked measles outbreak, unvaccinated children cannot attend public schools unless their parents produce a doctor-signed note stating the medical reason why their kids cannot be vaccinated.

Although the principle of religious freedom is clearly outlined in the constitution, the U.S. government has historically put limits on such freedoms.

Consider the use of drugs like peyote, for example. Many Native Americans use this mildly hallucinogenic, and illegal, drug as part of their religious services. The federal government shut down this practice in the 1800s, and it took the establishment of the Native American Church in 1918 to restore it, declaring that peyote is a sacrament in this church.

Nearly 100 years later, another religious group took their grievance all the way to the US Supreme Court. This particular group, a church known as Uniao Do Vegetal (Union of the Plants), uses hoasca, a tea containing the illegal hallucinogenic drug diemethyltryptamine (DMT), as part of their worship services. A unanimous Supreme Court allowed them to continue doing so.

Whether or not the vaccination issue falls under a similar exemption may be up to the Supreme Court to ultimately determine.

If people ask for my support in their desire to have religious freedom from the Covid vaccines, will the ULC support me in doing so?

Charles, did you receive a response to your question?

Given that ULC uses freedom as its basis to exploit loopholes that allow anyone to be an ordained minister to officiate weddings and similar events it seems a bit hypocritical to not support those who wish to use the very same freedoms to stop government overreach attempting to limit medical freedom. If ULC wont change its stance on this than perhaps we need to consider taking our names off the churches rolls. Freedom is freedom and is not to be cherry picked

I to would like the answer to Charles Roy Embrey III's question please.

I too am curious of this. I respectfully agree with members of my congregation that what goes inside their body should be their choice, particularly when it comes to any substance with no data on long term effects. (Insert Deity/non-Deity of choice) blessed our people freedom and I do not wish to infringe on those given rights. We certainly do not force our sacraments on anyone.

Personally, I say do it.

What are they going to do? Excommunicate you?

Freedom is freedom. If the ULC elders do not take the freedoms of their leaders seriously maybe its time for different leadership of the ULC.

Okay, that was a major cop-out on the part of Universal Life Church. It does promote and claim that it's ministers are empowered. Yet, here it directly states that we need to consult a physician. There is a conflict right there... and they are basically saying... fend for yourself and leave us out of it.

I would also like to know if the ULC would support me?

I became a member of ULC in 2013 and was guided by my love of life, spirit, and individual connection with The Creator. Our church and community is rooted in the freedom of the individual. We recognize and openly accept each other transcending our differences. It disappoints me that the church elders will not stand behind the same principles of individual choice and freedom.

Could not agree with you more. Like you, I was guided by my love of life, spirit and connection with Our Creator. I am hoping to start a church that belives in the freedom of the individual, one that recognizes and accepts each other's strengths and differences. I am so disappointed in the fact that the Elders do not stand behind the us in the individual choice of freedom. I think that we, as ministers should be able to assist others with their beliefs, which includes medical interventions to our bodies.

Braendon, Naomi McDade, I agree with you completely, and am in the same postion with my congregation...

The way that you could look at it is that you were ordained by the ULC, but you are an elder of the church that you operate. So when you speak of beliefs, your are speaking of your/your churches beliefs, not those of ULC. Any religious guidance or support that you provide is coming from yourself and/or your church, not ULC. In that regard, do your own thing, just don't sign ULC's name to it.

Shame on ULC. First, for not responding to these comments. Second, for not standing up for the religious freedom they say they espouse. As a minister, I should be able to help my congregation uphold their beliefs -- among which is the belief that through prayerful meditation, we can access the wisdom of our creatrix or creator to determine which, if any, medical interventions are right for our bodies. Let the Supreme Court handle the secular part of this issue. ULC should stand behind their ministers to advocate for freedom of choice. And, they should at least have the courtesy to respond to their ministers!

There is no law that says we can't create our own church. If you are a mystic and have direct communion, your conscience will allow you to hear God's Will. Big Pharma paints a narrative that anyone who dies no obey the narrative are criminals.

Has the church updated their ideas on authorizing religious exemption papers for shots(vaccines)? Is the ULC just a ministry for weddings? I did read the fine print on the bottom.

If you hear back let me know but with the main tenet to do that which is right, I would say that signing an exemption would fall into that as along as the minister believes that to be so.

Polio vaccines are vaccines used to prevent poliomyelitis. check out how it was invented who invented the vaccine for polio

I am also wondering about this however I do not live in the states so would you still support me?

This is ashame since we all are doing our part in keeping morality in our communities. Most medical professionals are being pushed and told that they HAVE to make people get this experimental vaccine!

I hope the ULC will reconsider their position on this important issue out of respect for its own history, and how it came to be in the first place.

this is becoming a very large issue

I was blasted on my page on nextdoor stating that if I charge a love donation, that I'm scamming people and they claim that what I'm doing is illegal. I'm CO and I know that several people do not want this experimental vaccine and want to keep their jobs.

Reverend Jackie, Charging "a love donation" is the same as charging a fee. While there's nothing wrong with charging a reasonable amount for your time and travel expenses, you can only call it a "donation" if that fee is voluntary and the donor can decide on the amount. Regardless, I wouldn't consider it "scamming people" so long as they are getting the services they requested.

As far as "illegal" goes, check your local laws to be sure, but that comment is likely BS from someone who doesn't know what they are talking about. So many people nowadays are accustomed to the status quo and not educated or open-minded enough to understand that there is more in the world. So research, research, research to ensure that you are going about things the legal way, and pitty those who are misinformed, ignorant, or too lazy to learn that they have options beyond what they have been conditioned to think.

Hey guys, I know this is late but I'm pretty sure the church leaders are still leaving it up to us on how we choose to practice our beliefs. What the disclosure statement says is that we can't create an exemption letter and sign it under the name of the church, meaning we cannot speak for the entirety of the organization! I'm sure that we can still provide proof of our offiliation (such as a letter of good standing, licences, etc.), and if denied an excemption request, for example from an employer, we have the right to sue them if we feel discriminated against for our spiritual practice, even if it goes all the way to the Supreme Court. For those with congregations, you should be able to protect your flock by having a membership list, in case members need to provide proof of their offiliation to the church, to an employer. Of course, remember to keep up to date with your state's laws! This is just my interpretation and I'm not saying I'm correct on the matter, but I hope it helps. Peace be with you all, and keep up the good fight!