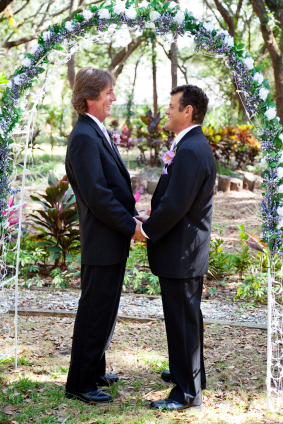 UPDATE: As of 2015, ministers can perform legally binding same-sex marriages in all 50 states.

On Nov. 6, 2012, voters in Maine, Maryland, and Washington secured a major victory in the campaign for complete marriage equality throughout the U.S. by legalizing same sex marriage there. Legally-authorized wedding officiants like Universal Life Church ministers will soon be able to perform gay weddings for any loving couple who wants one in these states. In addition to Maine, Maryland, and Washington, people who have been ordained by the Universal Life Church are also able to perform gay weddings in the other six states where they have been legalized; these include Connecticut, Iowa, Massachusetts, New Hampshire, New York, and Vermont.

Victories in the fight for marriage equality in the U.S. would be less significant were it not for the Universal Life Church because ULC ministers and gay weddings tend to go hand in hand. A higher proportion of same sex marriages are solemnized by ULC Ministries ministers than the proportion of opposite sex marriages they solemnize. This is largely due to the fact that ULC ministers generally have liberal, non-traditional views on religion and therefore do not buy into the bible-based reasoning that prevents the preachers of many Christian churches from performing gay weddings. In many cases, ministers of organizations like the Universal Life Church are the only wedding officiants available to homosexual couples and thus must be the ones who officiate their weddings. Fortunately, this is a job that many ULC wedding officiants relish.

The mantra "We are all children of the same universe" pertains to sexual orientation as much as it does for spiritual beliefs. Unlike most religious denominations, the Universal Life Church Ministries sees no harm in allowing its ministers to perform same sex marriages. We abhor the idea of treating gay people as second class citizens, which is effectively what other churches do when they refuse to acknowledge their right to marry.

The Universal Life Church Ministries is not alone in their pro gay marriage sentiments. In this video, a preacher from Missouri defends gay rights by pointing out that the arguments against them are not from this century. Make sure to watch the full video in order to actually see what he is trying to accomplish.

How to Become a Universal Life Church Minister

If you know a gay couple that would like to get married but is not able to find a good wedding officiant, we strongly encourage you to get ordained with the Universal Life Church so that you can perform their wedding yourself. ULC wedding officiants generally know the couples whose weddings they perform and their ceremonies thus tend to be more personalized and meaningful for both the couples and their guests. Given the choice between a beautiful, moving ceremony performed by a close friend or family member and a civil ceremony held in a drab judge's office, most couples will choose the former and have a Universal Life Church minister perform their wedding.

Follow these steps to become a legally ordained minister:

The Universal Life Church ordination is free, never needs to be renewed, and is legally recognized in 48 U.S. states. ULC ministers in some states need to buy ministerial documentation in order to prove their ordained status when they file for marriage licenses, apply to perform chaplain work inside prisons and hospitals, and so on.