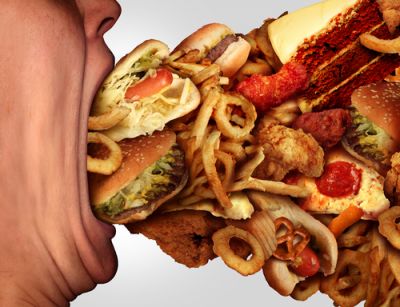 Gluttony is usually associated with overeating, but it really has to do with overconsumption. In “Charlie and the Chocolate Factory,” Augustus Gloop, the first child who has an accident, almost drowns in the chocolate river due to gluttony. Gluttons are often portrayed as obese individuals with horrible eating habits.

Ursula from “The Little Mermaid” is another example of gluttony in pop culture. On Broadway, one of her songs reminisces about the gourmet meals served in King Triton’s court. Gaston from “Beauty and the Beast” embodies gluttony. He eats five dozen eggs every morning, but he’s also obsessed with being, looking and having the best.

One of the best examples of gluttony is from “Cloudy with a Chance of Meatballs.” The mayor, Bruce Campbell, keeps getting fatter as he gets more corrupt. Who could forget Audrey from “Little Shop of Horrors?” She wants human blood and forces Seymour to bring her what she needs. As she is fed more blood, she gets bigger.

Aquinas recommends fasting to overcome gluttony. It’s not the food at fault for the sin; it’s the desire for the food. The quote, “Eat to live, not live to eat,” is attributed to Socrates. The early Greeks also avoided gluttony.

Unlike some of the seven deadly sins, gluttony is not mentioned in the 10 Commandments, but it is mentioned many times in Proverbs. The author of Proverbs advises that you shouldn’t overeat honey, because you may vomit (Proverbs 25:16). When you sit down to eat, “consider diligently” what you eat, from Proverbs 23:2. The Amplified version of the Bible explains that you shouldn’t desire the delicacies of a king. The food may be offered with deceptive motives.

In the Gospel of Luke, John the Baptist and Jesus are compared by their eating habits. People say that John the Baptist has a devil because he doesn’t eat bread and doesn’t drink wine. But those same people call Jesus a glutton because he eats and drinks. Use wisdom in determining character.

In 1 Samuel, the sons of the high priest do not respect the Jewish laws as it pertained to sacrifices and the portion that the priests received. They did not prepare the meat appropriately. It was considered disrespectful. The two sons die in a battle because of their sin of gluttony.

One of the examples of gluttony in the Bible is found in Genesis, when Esau sold his birthright for a bowl of porridge and bread. He was punished for giving up something very important for simple food. Yes, his brother and mother tricked him, but Esau was ultimately at fault. He was the one who was so eager to have dinner. Rather than waiting for food to be prepared, he accepted Jacob’s proposal without considering the consequences.

Gluttony is often represented by an obese person, but not everyone who is fat is a glutton. Even overeating on Thanksgiving doesn’t necessarily make you a glutton. Gluttony is more of an attitude that enough is never enough. It could pertain to food, but it could also pertain to drinking too much or binging on Netflix.

Temperance is considered the opposite of gluttony. Temperance is not abstinence from alcohol, although that is one facet. It’s actually defined as moderation or a voluntary self-restraint. The early temperance movement was to get people to cut back on their drinking.

Gluttony isn’t a sin about food; it’s about indulgences. Overindulging usually isn’t healthy. Consider how you can manage your life more effectively through temperance.