Salt in the New Testament 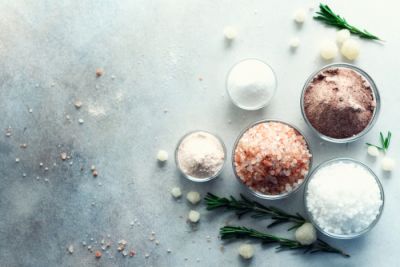 One of the most famous references to salt is from Matthew 5, when Jesus is preaching the Sermon on the Mount. The disciples are referred to as “the salt of the earth.” Matthew Henry’s Bible Commentary explains that this was to encourage the few (and weak) men who were following Jesus. “Being to work silent as salt . . . would diffuse its savour (sic) far and wide.” Force would never work to convert others. It would take grace to preach the gospel and reach others.

Salt is referenced many times in the New Testament. It was a valuable commodity, not only used to flavor food. Salt preserved food for when crops were scarce, and it was part of the sacrifice at the temple. It could also be used as a disinfectant. It’s thought that Roman soldiers used salt as currency. The word “salary” has its roots in the Latin word “salarium,” which means “pertaining to salt.”

Matthew 5:13 and Mark 9:50 are similar: “Salt is good, but if it loses its saltiness, how can you make it salty again?” Matthew says that flavorless salt is not good for anything except to be thrown out on the ground. Without its saltiness, salt would simply be a rock. Mark 9:50 finishes with the statement, “Have salt among yourselves and be at peace with each other.”

Matthew Henry’s Commentary suggests that the Mark 9 reference relates to a verse in Leviticus where God commands meat-offerings to be salted. Man is to be a living sacrifice to God. Thus, man must be salted to subdue his or her corrupt nature.

In Colossians 4, Paul writes, “Let your conversation be always full of grace, seasoned with salt.” What Christians say must be tempered with grace. Speaking truth might be right, but it must be flavored with wisdom and love. Knowing the importance of salt in biblical times can put this verse in a new perspective.

The New Testament writers surely understood the “covenant of salt,” which gives these scriptures another layer. The covenant of salt was about loyalty and friendship. The penalty for breaking the salt covenant was death. When people ate salt together, it was a promise of fidelity. The host took care of his guests, and it was up to the guests to attend to the host’s interests.

Watch What You Say?

James 3:10–12 has a figurative use of salt. He is writing about the absurdity of the same mouth giving both blessings and curses: “Out of the same mouth come praise and cursing. My brothers and sisters, this should not be. Can both fresh water and salt water flow from the same spring? My brothers and sisters, can a fig tree bear olives, or a grapevine bear figs? Neither can a salt spring produce fresh water.”

Matthew Henry’s Bible Commentary calls these contradictions contra-indicated of grace. Piety calls for grace. Today, that scripture could be a warning to listen to what people say against what they do. How can someone who talks sweet but acts with vengeance be a good person?

Are You Worth Your Salt?

Today, salt can be found very cheaply. Most people don’t think twice about shaking salt on their food at dinner. In biblical times, it was much different. Some of the roads and cities of ancient times developed around the salt trade. Salt is an essential element to the human body. People once built cities around salt mines.

Salt was once a highly prized commodity that took time to harvest. It was scarce. The saying “worth one’s salt” means that you are competent and worth your wages. The next time you pick up the salt shaker on your table, think about the value of salt. Are you worth your salt?