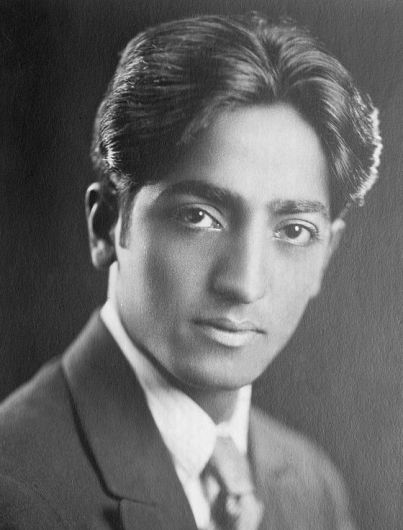 In 1911 The Order of the Eastern Star was founded to proclaim the coming of the World Teacher that had been sought by the Theosophical Society. In 1912 Krishnamurti, who had been born in 1895 into a modest Brahmin home in India, was made head of this order. In 1909 Krishnamurti's father arranged with Annie Besant, the president of the International Theosophical Society, to work for that organization in Madras, India. This is where Krishnamurti was discovered by Annie Besant and a deep bond formed between them.

In 1929 Krishanmurti disbanded the organization at the annual Star Gathering at his castle in Holland with a radical address "Truth is a Pathless Land". In doing so, Krishnamurti rejected the guru status, estates, money, power, and all claims to authority. He spent the rest of his life, until 1986, as an obscure teacher, traveling throughout the world with his message of radical self inquiry and present moment awareness. As such, Krishnamurti embodied the Taoist concept of "cloaking the light", a concept that affirms that the greatest of sages are not known as such, and infers that the ones that are well known are not the greatest of sages.

Most of the writings of Krishnamurti are actually transcripts of the talks he gave throughout his lifetime in Europe, India, the United States, South America, Australia, and New Zealand.

It is difficult to separate the concepts of radical self inquiry and present moment awareness, but this article will focus on the latter from the perspective of this great teacher.

The best way to present the concept of present moment awareness is with an example. Examples are difficult as readers tend to focus on the example rather than the concept itself. However, it may be the only way to accurately project the concepts. Using anger and violence as an example of an expression, though you can substitute greed, envy, and dozens of other expressions to generalize the concept.

When one is angry and violent, they may say or think, "I am angry". From the perspective of radical self inquiry, this statement is actually a step away from the expression and a step away from the awareness of this expression in the present moment. The actual fact is that "I am anger" as anger is an abstract concept and without the expression does not exist. If "I" was not anger, anger would not exist in the world at that moment and in that place.

Often when one is angry, the expression is violence. According to Krishnamurti, violence is broadly interpreted: "Violence is not merely killing another. It is violence when we use a sharp word, when we make a gesture to brush away a person, when we obey because there is fear. Violence is much more subtle, much deeper... When you call yourself a Christian or a European, or anything else, you are being violent. Do you see why it is violent? Because you are separating yourself from the rest of mankind."

When anger and violence is experienced and expressed, many think, "I should not be angry". This is the second step away from reality and the present moment awareness. We are condemning the expression, the experience we are engulfed in. Often this results in a compulsion to self improvement, anger management and other compensations.

Or the thought, "I have a right to be angry". Which again is a further step from the actual fact of experience and expression. This is a justification of the anger and violence, again an escape and separation from the actual present moment reality.

According to Krishnamurti and radical self inquiry, "Can you look at anger as if it were something by itself? Can you look at it completely objectively, which means neither defending it nor condemning it?"

According to radical self inquiry, anger and violence must be understood and this comes only when we remain in the present moment with that anger and violence which we are experiencing and expressing. Again Krishnamurti writes, "But to be beyond violence I cannot suppress it, I cannot deny it, I cannot say, 'Well, it is a part of me and that's that,' or 'I don't want it.' I have to look at it, I have to study it, I must become very intimate with it and I cannot become intimate with it if I condemn it or justify it."

In the process of conditioning and personality development we are taught very subtle and strategic ways to escape from these aspects of our self which we tend to condemn or justify. Some of these subtle escapes are listed below, again using anger and violence as an example.

One of the final steps away from the expression and experience is called idealization. We create a fictitious ideal and strive toward that, without knowing that we are becoming so far away from insight and understanding in the process.

In his discussion Krishnamurti affirms that violence is a "thing" nonviolence is a "non-thing". "Some of us, in order to rid ourselves of violence, have used a concept, an ideal called nonviolence, and we think by having an ideal of the opposite to violence, nonviolence, we can get rid of the fact, the actual - but we cannot."

"If you want to understand the actual you must give your whole attention, all your energy to it. That attention and energy are distracted when you create a fictitious, ideal world. To investigate the fact of your own anger you must pass no judgment on it, for the moment you conceive of its opposite you condemn it and, therefore, you cannot see it as it is. To live completely, fully, in the moment is to live with what is, the actual, without any sense of condemnation or justification - then you understand it so totally that you are finished with it. When you see clearly the problem is solved."

If you are thinking, that is too simple, you are not alone. Krishnamurti actually referred to the simplicity of his message and predicted that many would reject it as too simple, as it is not another "method" or practice. In fact it is the opposite.

Enlightenment, enhanced consciousness, present moment awareness is our natural state of being. We struggle through effort and volition to avoid our own natural state of enlightenment and meditative thought. When one presents us with that which we must learn or practice in order to "become" enlightened, we are happy as we are conditioned by our culture to believe that we need to exert effort toward spiritual "pursuits".

Nothing could be further from truth. We struggle drowsed and impotent under the spell of this conditioning with it inherent unconscious processing. Relaxing this effort and volition is the key to entering into the states of enhanced awareness and meditation.

Strategies and processes to avoid the present moment by distracting energy into the future:

Strategies and processes to avoid the present moment by distracting energy into the past:

As you can see, some of these strategies are revered by our cultural values, some are not. Often we evolve as a culture and relabel these strategies. For example, most of us know that being in a situation and having expectations may cause frustration and suffering if these expectations are not met. However, at the same time we set intentions for ourselves and believe that to be a spiritual or "co-creative" venture. Perhaps intention is different from expectation, however, both are strategies to distract from present moment awareness.

In future articles we will further explore some of these strategies in relationship to the precious energy which is our life, the Chi.

In summary, Krishnamurti encourages us to relax and relinquish the various escapes that prevent our present moment awareness. He affirms that this is the only way to become intimate with our experience to enhance understanding and insight. This way requires less and less effort and involves greater and greater awareness, leading us to that present moment awareness that provides us with the focus of all our energy on life in the now.

All quotes from the book "Total Freedom" by Jeddu Krishnamurti, specifically from the article "Freedom from the Known", pages 109 - 133.