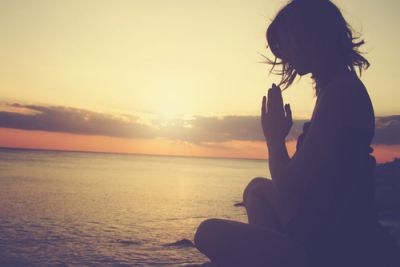 You probably know all about workplace anxiety. Whether it’s attempting to impress your boss, trying to fulfill your responsibility to land that important new account, or falling into the grip of what has come to be known as the “PowerPoint anxiety apocalypse” when facing the prospect of addressing 200 conference attendees, workplace anxiety is a phenomenon with which everyone is all too familiar.

Now journalist and author Robert Wright posits a new theory: By practicing Buddhist meditation, you can arrive at a point of “mindful meditation” that will not only relieve your workplace anxiety but also make you far more productive at work.

When Wright wrote “The Moral Animal” in 1994, its main thesis was that evolutionary psychology (EP) explains the anxiety produced by work crises. Per EP, human beings are hard-wired for survival. In hunter-gatherer societies, survival depended on “impressing” your foes.

In his latest book, “Why Buddhism is True: The Science and Philosophy of Meditation and Enlightenment,” Wright posits the idea that the hunter-gatherer hard-wired survival mentality has outlived its usefulness. Nevertheless, it remains embedded in our consciousness. The idea, according to Wright, is that this leftover survival instinct produces dissatisfaction but that Buddhist meditation can enlighten us as to why we’re so dissatisfied and what to do about it.

Wright’s second major theory is that human beings are not designed for happiness, only the pursuit thereof. Again, he borrows this idea from evolutionary psychology, which holds that happiness is an illusory concept. People think that happiness can be achieved and sustained, but such is not the case. To bring his argument full circle, Wright points out that one of the main precepts of Buddhism is that the best we can do is to engage in “the pursuit of happiness,” as America’s founding fathers so eloquently put it. We can never achieve it and hold on to it in lasting form.

Mindful meditation, however, can help us come to terms with the illusory nature of happiness according to Wright. In the process, it can also rid us of that often debilitating workplace anxiety that threatens to have us upchucking on stage when called upon to make a speech or other presentation to a roomful of unknown people whom we unconsciously assume are hostile to what we’re going to say.

Cognizant of the fact that many people view meditating as a sure way to lose an edge in corporate America, Wright suggests a different approach, one that also recognizes the illusory nature of fear and anxiety as well as of happiness. Wright proposes that mindful mediation allows you to logically examine your feelings of workplace anxiety and lets you stop taking them so seriously. Once you properly meditate about its existence and cause, you gain the distance necessary to determine whether your feelings are valid. You then discard the invalid ones. This, in turn, allows you to become more productive at work.

Wright states, “Natural selection doesn’t want us to be happy, just productive.” In his view, Buddhism and its meditation practices go hand in hand with evolutionary psychology. Both encompass the idea that the reason human beings suffer is because we fail to clearly see the world.

Wright asserts that 30 minutes per day of meditation will allow you to clearly see that life consists of a never-ending cycle. You pursue the things that in a hunter-gatherer society would have allowed you and yours to survive: status, resources, sex, etc. But once you achieve these things, the happiness they bring quickly fades. Ergo, you start the whole process again. This constant pursuit of happiness is exactly what results in workplace anxiety. Per Wright, once your meditation practices let you internalize the fact that it’s all simply a never-ending cycle, your workplace anxiety will disappear, or at least will become manageable.