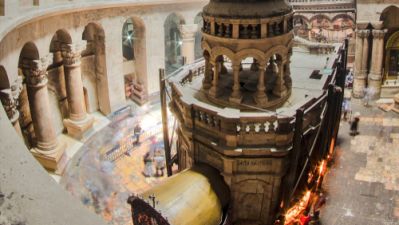 If you have ever visited the Holy Lands or made a pilgrimage there, one of the places you undoubtedly visited was Holy Sepulchre Church, Jerusalem’s holiest of shrines. This ancient structure, first constructed in 1693, has long been jointly owned by six separate Christian denominations: Roman Catholic, Greek Orthodox, Armenian, Coptic, Ethiopian, and Syrian Orthodox churches. Each denomination maintains convents and chapels within the sprawling complex and conducts various daily liturgies.

One thing your tour guide likely pointed out to you was an old wooden ladder standing on a balcony above the Holy Sepulchre’s main entry. Surprisingly enough, this prosaic object represents a monumental piece of Middle Eastern history. It was put there after an Ottoman Turkish sultan made an 1852 declaration as to which denominations controlled which parts of the overall structure. His declaration was meant to ease tensions that even then boiled up between and among world religious powers seeking to establish and maintain themselves in the Middle East. But the actual effect of the sultan’s declaration was to freeze the Holy Sepulchre Church in time, while the ladder, which has been standing in place ever since, has long since come to be known as the “status quo ladder.”

The problem with status quo, however, is that nothing gets done. Everything remains virtually the same as it always was. In terms of Holy Sepulchre Church, 160+ years of status quo has resulted in monumental rot and decay slowly but surely taking over the building. Specifically, the building’s problems that exist today include the following:

Now at last there may be new hope for Holy Sepulchre Church. In May of this year, leaders of the local Roman Catholic, Greek Orthodox and Armenian Orthodox churches, the three denominations tasked with the church’s primary control in the 1852 declaration, signed a tripartite agreement to renovate Holy Sepulchre’s foundations, floors, and sewage system. They also agreed to share any archeological discoveries made during the renovation, although the details of such shared ownership have yet to be worked out.

As for funding, the agreement calls for equal funding from each denomination to ensure that “the building cannot be seen as belonging to any one party.” The three denominations are also accepting outside donations, one of which is reported to be a $500 million donation from Jordan, that will be placed in a joint bank account whose signatories will in no way exert political influence on or ownership of the church.

As Ammon Ramon, a researcher at the Jerusalem Institute for Israel Studies, said, “The cooperation is increasing, and it’s more ambitious. It’s a sign that they have more trust in one another.”

The three denominations already restored the church’s edicule in 2017. This is the structure inside the church that covers the entrance to an underground tomb. Prior to the renovation, it was threatening to collapse.

The Other Three Denominations

While the three main denominations may be trusting each other more, such trust does not appear to extend to the Coptic, Ethiopian, and Syrian Orthodox churches that also own portions of Holy Sepulchre Church. None of them were involved in or even notified about either last year’s renovation or this year’s agreement to further renovate the dilapidated structure.

In the meantime, the status of Christianity in Jerusalem and other parts of Israel is tenuous at best. Ever since Israel became an independent state in 1948, massive emigration has reduced the Christian population from 20% to a mere 2%.