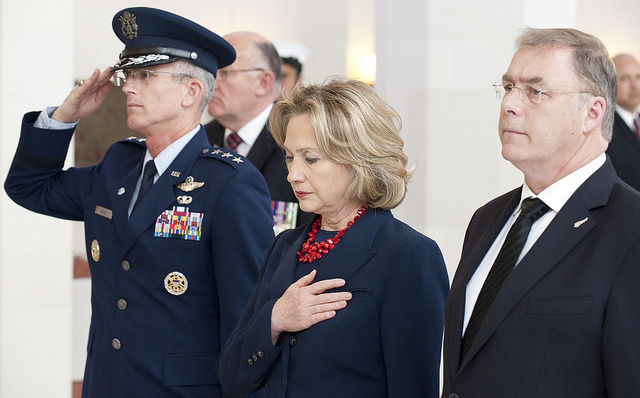 The Bible has a significant impact on American politics that goes beyond social issues like gay marriage and abortion. In a notable example, Hillary Clinton reported the book has had the most impact on her life, at the risk of sounding clichÃ©. Arguably the most influential female politician, Clinton stated that she has used the book as a moral guide and source of personal comfort. Should Hillary Clinton's religion matter?

The Place of the Bible in American Politics

The former first lady and Christian, also a likely candidate for President of the United States in 2016, says she has used the Bible as a source of wisdom throughout her lifetime. Like any piece of literature, the Bible is open to interpretation, especially when applied to politics in a country with a strict Establishment Clause, more commonly known as "separation of church and state." To Hillary Clinton religion does not have to be a strict doctrine. After all, she is a notoriously liberal politician on social issues.

Religious scripture was not written as a guide on domestic and foreign policy. Instead, its underlying teachings promote good will, empathy, and mercy. Similar to the Universal Life Church Ministries, the Bible can easily be interpreted as basically teaching others to "do that which is right." The book is intended to act as a moral guide and source of wisdom, not a political manual.

Hillary Clinton is arguably the most successful female politician in the United States. She also reported the book has been a source of personal comfort and encouragement. After all, politicians with fewer inherent challenges tend to be met with ample adversity. The Bible should help guide leaders in personal and moral endeavors. It has a definite place in American politics. However, it is not intended to directly guide all major decisions. Religion is only one factor in a much larger political landscape.

The Universal Life Church Ministries teaches strong ethics regarding human rights. Instead of disregarding religion in politics and other walks of life altogether, people like Hillary Clinton can embrace religious teachings as well as other academic philosophies.