Who Was John the Baptist’s Mother? 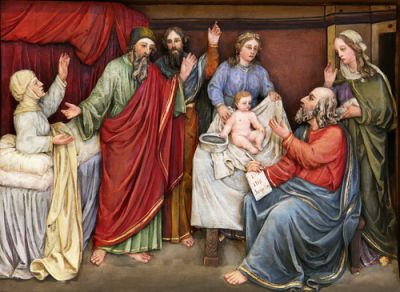 Christmas celebrates the birth of Jesus. Much of the Christmas story focuses on his mother, Mary, but there’s another important woman who played a role in the birth of Christ. She doesn’t get a lot of press in the Bible, but the Roman Catholic Church reveres her as a saint. She is Elizabeth, the mother of John the Baptist. Elizabeth’s story sets the stage for Jesus’ birth.

Why Is Elizabeth Important?

In the first chapter of the Gospel of Luke, an angel appears to Zechariah in the temple and tells him that his wife will bear a son. Zechariah is doubtful and questions the messenger. Because Zechariah didn’t believe the angel, he was struck mute until the baby was born. The Bible doesn’t record how Elizabeth responded, except that she went into seclusion when she became pregnant.

During the same time frame, Mary became pregnant. She was a young maiden, engaged to Joseph. When she became pregnant, it’s likely her family was quite angry with her. Joseph had paid the bride price, but since they were not yet married, her pregnancy put her in danger. Given the times, it could have resulted in an honor killing. It’s unknown if Mary left to see her cousin to escape her family or if her family was trying to buy time to find a solution. Either way, Elizabeth took Mary in to protect her.

The meeting of the two pregnant women was anything but ordinary. Elizabeth’s baby started kicking and moving in her womb. Elizabeth, who was not only the wife of a priest, but the daughter of one, pronounced a blessing on Mary:

“Blessed are you among women, and blessed is the child you will bear! But why am I so favored, that the mother of my Lord should come to me? As soon as the sound of your greeting reached my ears, the baby in my womb leaped for joy. Blessed is she who has believed that the Lord would fulfill his promises to her!” Luke 1:42–45.

Mary’s response was a song that is today called “The Magnificat,” which is often recited during Advent. Some scholars believe that Mary couldn’t possibly have composed the hymn, but because it is based on the song of Hannah in Second Samuel, it’s possible she did compose it. Mary would have known Hannah’s song and history. Hannah’s story mirrors Elizabeth’s. Hannah was another barren woman in the Bible, who asked for a son only to give him back to the priesthood.

Mary must have been present at the birth of Elizabeth’s baby. The scripture records that Mary stayed with Elizabeth for about three months. Babies start to move in the womb around the 28th week. Elizabeth insisted on naming her son John instead of a family name, which marked him as an outsider of the family. Her son would go on to prepare the way for Jesus’ ministry. John would baptize Jesus and die at the hand of King Herod.

There’s not much about Elizabeth or Zechariah in the Bible outside of the first chapter of Luke. Some scholars believe that John was raised by the Essenes at Qumran, a group that adopted young children. It’s possible that John’s parents never saw him grow up.

Fittingly, Saint Elizabeth is the patron saint of pregnant women. She is also revered as a pious and wise person in Islam. She is a woman that is often overlooked, but her story resonates as a reminder of her consideration to a young woman facing a crisis.