The Story Behind the King James Translation 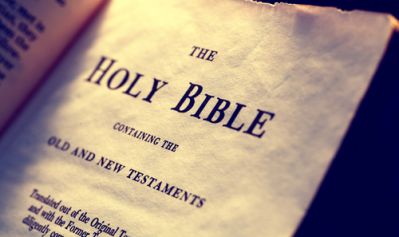 King James I inherited a mess when he ascended to the throne of England. The Church of England, Puritans and Catholics were at odds with each other. One big problem was the previous translation of the Bible. James convened the Hampton Court Conference, which would tackle some of the problems of the earlier translations. The translation work began in 1604. It took 47 scholars five years to complete the work. The King James Bible is one of the most important books in English culture.

To understand the turmoil that England was in when James ascended to the throne, you almost have to go back to King Henry VIII, best known for having six wives. King Henry’s first marriage was to Catharine of Aragon, his brother’s widow. It was this marriage that led to a disagreement with the Pope. Henry wanted the marriage annulled. When the Pope did not grant the annulment, Henry separated from the Catholic Church, naming himself Supreme Head of the Church of England. This started the English Reformation. Henry might have had six wives, but he only had three living offspring: Mary, Edward and Elizabeth.

As the only male heir, Edward took precedence over his sisters. Edward was nine years old when Henry died. During Edward’s reign, Protestantism was established in England. His council of regents imposed compulsory services in English and abolished the Mass. He never really ruled in his own right, because he died at the age of 15, but he did change the succession by naming Lady Jane Grey as his successor. This was to prevent England from returning to Catholicism. Lady Jane only reigned for nine short days before Mary, Edward’s sister and rightful heir, deposed Jane.

Queen Mary attempted to reverse the English Reformation. She would be known as Bloody Mary. She only reigned for five years, but during that time had 280 people burned at the stake for being a religious dissenter. Another 800 rich Protestants chose to leave England in exile. Mary even imprisoned her sister, Elizabeth, for suspicion of supporting the Protestant rebels. In the end, Elizabeth succeeded Mary.

Elizabeth I was more religiously tolerant than her brother or sister, but Elizabeth is largely responsible for the establishment of the Anglican Church. The Pope declared Elizabeth illegitimate. The Catholics in Ireland, subject to Elizabeth, turned hostile and routinely defied her authority, which led to turmoil in the kingdom.

Elizabeth did not marry, nor did she have children. She refused to name a successor, which made it difficult for her government to prepare for a smooth transition. James VI of Scotland had a strong claim, but Elizabeth did not outwardly recognize him. Still, he was proclaimed James I of England on her death. Although England was politically and religiously stable when Elizabeth died, there were concerns that James would throw England back into turmoil.

James ascended to the throne in 1603. He inherited an England that was in debt and religious turmoil. Many of his subjects were Roman Catholics, concerned about persecution. On the other hand, James was seeking a Spanish wife for his son, which concerned the Protestants, who feared that would bring a revival of Catholic power.

Still, James moved forward with the translation of the Bible. This version was to conform to the episcopal structure of the Church of England. Considering the state of England when James came into power, it’s astounding that he was able to bring 47 scholars together to complete the translation. Even more astonishing is the influence that the translation has had in the English-speaking world.

If you’re interested in knowing more about the complex set of events that led to the making of the King James Bible, read Adam Nicolson’s bestseller “God’s Secretaries.” The book goes into great detail about the scholars, plots and conspiracies that threatened James and the Hampton Court Conference.