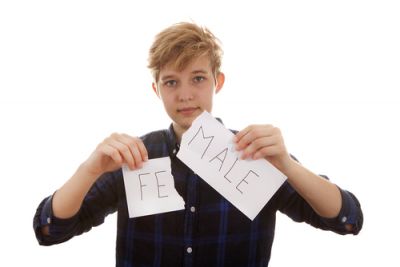 The Church of England recently published guidelines for “Pastoral Guidance for use in conjunction with the Affirmation of Baptismal Faith in the context of gender transition.” It’s an interesting development from the same church that chose to put the American branch of the church, the Episcopal Church, in a “time out” for having a liturgy for gay marriage.

This Baptism Is Not a Renaming Ceremony

The guidelines make it clear that this is an opportunity for trans people to reaffirm their baptismal vows publicly with their new name. It’s not to be a re-baptism or renaming ceremony. It’s a huge step for the trans community to feel welcome and to be equal members in the church under their new identities.

“The emphasis is placed not on the past or future of the candidate alone, but on their faith in Jesus Christ. The Affirmation therefore gives priority to the original and authentic baptism of the individual as the sacramental beginning of the Christian life, allowing someone who has undergone a serious and lasting change to re-dedicate their life and identity to Christ.”

Pastors in the Church of England now have a place of reference to offer this rite to trans men and women. We applaud the church for accepting transgender individuals and finding ways to welcome them.

The Episcopal Church also has a rite for transgender people, called “A Service for Renaming.” This ritual acknowledges the new name and is different than the service in the Church of England. Baptism is still available for anyone in the Episcopal Church, regardless of gender identity.

Re-naming Is Common in the Bible

The adoption of a new name has a long history in scripture and Judeo-Christian tradition. In many monastic communities, it’s common to take a new name, usually that of a saint, at confirmation of receiving a habit or beginning a new profession. Mother Teresa’s birthname was Anjezë. Pope Francis was named Jorge Mario at birth.

Many biblical figures were renamed at pivotal points in their lives. Abram was renamed Abraham, and his wife, Sarai, received a new name of Sarah. Jacob, the father of the 12 nations of Israel, was renamed Israel after he wrestled with God at Peniel. Saul, a man who persecuted Christians, was renamed Paul after his conversion.

The church’s guidelines suggest other scripture that is accepting of transgender individuals, such as Galatians 3:27–4:7, in which Paul writes, “In baptism into Christ, there is no longer male and female.” In 2 Corinthians 5, scripture says, “In Christ, there is a new creation.” In I John, readers are reminded to “love, not in word or speech, but in truth and action.”

A Welcome Addition to the Common Worship

This service will be included in the church’s modern liturgical supplement texts. It should help provide pastoral sensibility for creating a rite for transgender men and women. This rite allows those who have undergone a serious change in identity to rededicate themselves and their new identity to Christ.

Conservatives are concerned that the Church of England is moving toward a “denial of God” for respecting a transgender person’s chosen name and pronouns. It’s unlikely that the church will listen to the critics who believe that the church is imploding for accommodating transgender ideology.

The liturgy for the rite is available now in the Church of England. The Episcopal Church liturgy is also available.