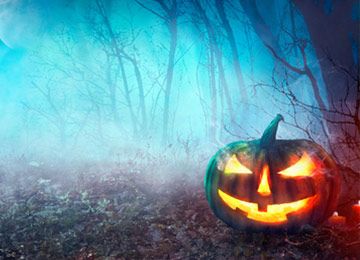 Halloween, that beloved holiday of trick-or-treat, costumes and masks, jack-o-lanterns, children’s and adults’ parties, and outrageous sugar highs, is almost upon us. But do you know why we celebrate this holiday and how its traditions started? Here are 10 fascinating Halloween facts for you to impress your friends with this year.

The word Halloween is actually a double contraction of two words: Hallow (a holy person) and evening (the night before). In other words, Halloween represents the night before a celebration of the saints, aka spirits, aka the dead. But the word first appeared in a 1785 poem of the same name composed by Scottish poet Robert Burns.

According to historians and archeologists, the celebration of Halloween had its beginnings with the Celts some 2,000 years ago. These people lived in what is today Britain and northern France and celebrated Samhain, the beginning of their new year, on November 1. The celebration was a recognition of the end of the harvest and the beginning of the cold, dark winter, when many people usually died. The Celts also believed that on the night of October 31, the lines blurred between the worlds inhabited by the living and the dead. Consequently, the Celts built huge bonfires on this night in which they burned harvested crops and made animal sacrifices. They also wore costumes consisting of animal hides and heads. During the celebration, the Druids (Celtic priests) would “contact” the wandering spirits and call upon them to help predict the future. At the conclusion of the celebration, people would light torches from the dying bonfires and take them back to their homes to light their hearth fires.

By 43 CE, the Celtic territory had been absorbed into the Roman Empire, where it remained for about 400 years. The Romans themselves had two holidays: Feralia, the day in late October when they commemorated the dead, and Pomona, the day commemorating their goddess of trees and fruit. Ultimately they combined these two holidays into one and incorporated many of the Celtic Samhain traditions into them. In addition, the apple symbolized Pomona, leading to the tradition of bobbing for apples on this holy day.

Several centuries later, in 609 CE to be exact, Pope Gregory III instituted the church holiday (holy day) of All Saints Day, aka All Hallows Day, celebrated on November 1. The night before became known as All Hallows Eve. In the following centuries, the church instituted a second holy day, All Souls’ Day on November 2, to honor all the dead. Not surprisingly, the church incorporated many of the popular secular celebrations into All Hallows Eve, including bonfires, costumes, and parades, in an attempt to provide an alternate church-sanctioned celebration.

5. The Coming to America

Halloween celebrations in colonial America were few and far between. The Puritans, strict Protestants, “ruled” the northern colonies and would have nothing to do with what they viewed as a Catholic holiday. Maryland, however, was a Catholic colony, and its inhabitants continued to celebrate Halloween, as did some of the southern colonies. These public celebrations included such things as “play parties,” where neighbors would gather together around bonfires to celebrate the harvest, dance, sing, and swap stories of the dead, known as ghost stories.

Country-wide Halloween celebrations didn’t begin to take place in America, however, until the latter half of the 19th century, when our nation saw a major influx of new immigrants, particularly from Ireland where the potato famine sent thousands of Irish families fleeing from their native Catholic country to America. Naturally, they brought their Halloween traditions with them. However, by the beginning of the 20th century, Halloween in America had lost virtually all of its religious significance and become a secular holiday.

Stay tuned for Part II of our series to discover more fascinating facts about Halloween.