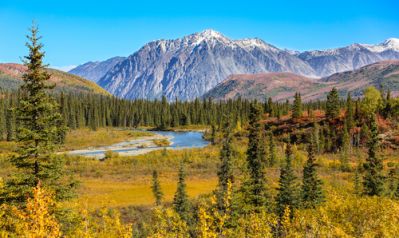 Alaska’s nickname is The Last Frontier. Although it’s the least populated state in the nation, it’s one of the most populated areas above the 60th parallel in North America. Most of Alaska’s residents live in Anchorage, but the capital city is Juneau. Alaska is generally thought of as a wildlife refuge, largely because over two-thirds of the state is managed by the U.S. government as public lands. However, there are still some wonderful religious and sacred sites within Alaska’s borders.

Huffington Post calls the mountain Denali, the highest peak in North America, the most sacred place in Alaska. Indigenous peoples called the peak Denali until a gold prospector renamed it in honor of a presidential candidate, William McKinley. In 2015, the name was changed back to its original designation. The mountain is important to the Native Americans who reside in Alaska. It’s been estimated that humans lived in the region more than 8,000 years ago.

In 1981, Pope John Paul II prayed at this cathedral, the oldest Catholic parish in Anchorage. An outdoor mass was celebrated in a local park. The cathedral could not have accommodated the crowd, which is thought to be the largest gathering in the state. The church was built in 1915. Miraculously, it survived the 1964 Anchorage earthquake that registered 9.2 on the Richter scale. (It’s the second largest earthquake ever recorded.)

Our Lady of Guadalupe Co-cathedral, Anchorage

This beautiful cathedral is fairly young. The parish was founded in 1970. The new church was inaugurated in December 2005. It’s a beautiful Spanish adobe-styled cathedral with two intercessor relics. The chair that Pope John Paul II used in 1981 is being used as the bishop’s chair at the altar. The other relic is a replica of the cactus-cloth tilma that has the image of the Mother of God. The original tilma is enshrined in Mexico City. Millions of pilgrims visit the basilica every year to see the undecayed, 500-year-old image.

This site offers a nature walk through a beautiful forest with artistic representations of the 14 Stations of the Cross. The address is in Anchorage, but it’s actually near the Chugach State Park, a little southwest of the city proper. The center offers retreats and spiritual direction. Although it collaborates with the Archdiocese, it’s an ecumenical site.

This site has the St. Nicholas Church, which was built in 1962. The Russian Orthodox church has an active congregation, but it dates as early as 1830. The old log cabin St. Nicholas church was moved to the site in 1900 and used as the sanctuary until the new church was built. The cemetery on site is a mix of Athabaskan spirit houses and the practices of the Orthodox community. It’s a unique blend of the two cultures.

This church was the first Catholic parish in the community. It was built for the Catholic gold miners and their families. Originally, the church was built quite a distance from the hospital. Priests who attended the sick and said daily Mass had a difficult time traveling between the church and hospital. One of the priests determined to move the church. It had to go across the river. Instead of building a bridge, the priest devised a plan to roll the building across the river when it froze over. The whole town turned out to watch the spectacle. Amazingly, the church made it to its new site.

Today, the church houses over 102 relics, tiny fragments of bones or clothing from a saint who is venerated. The items span over 2,000 years of history, including objects from Saint Thomas Aquinas, Saint Andrew the Apostle and early North American martyrs.