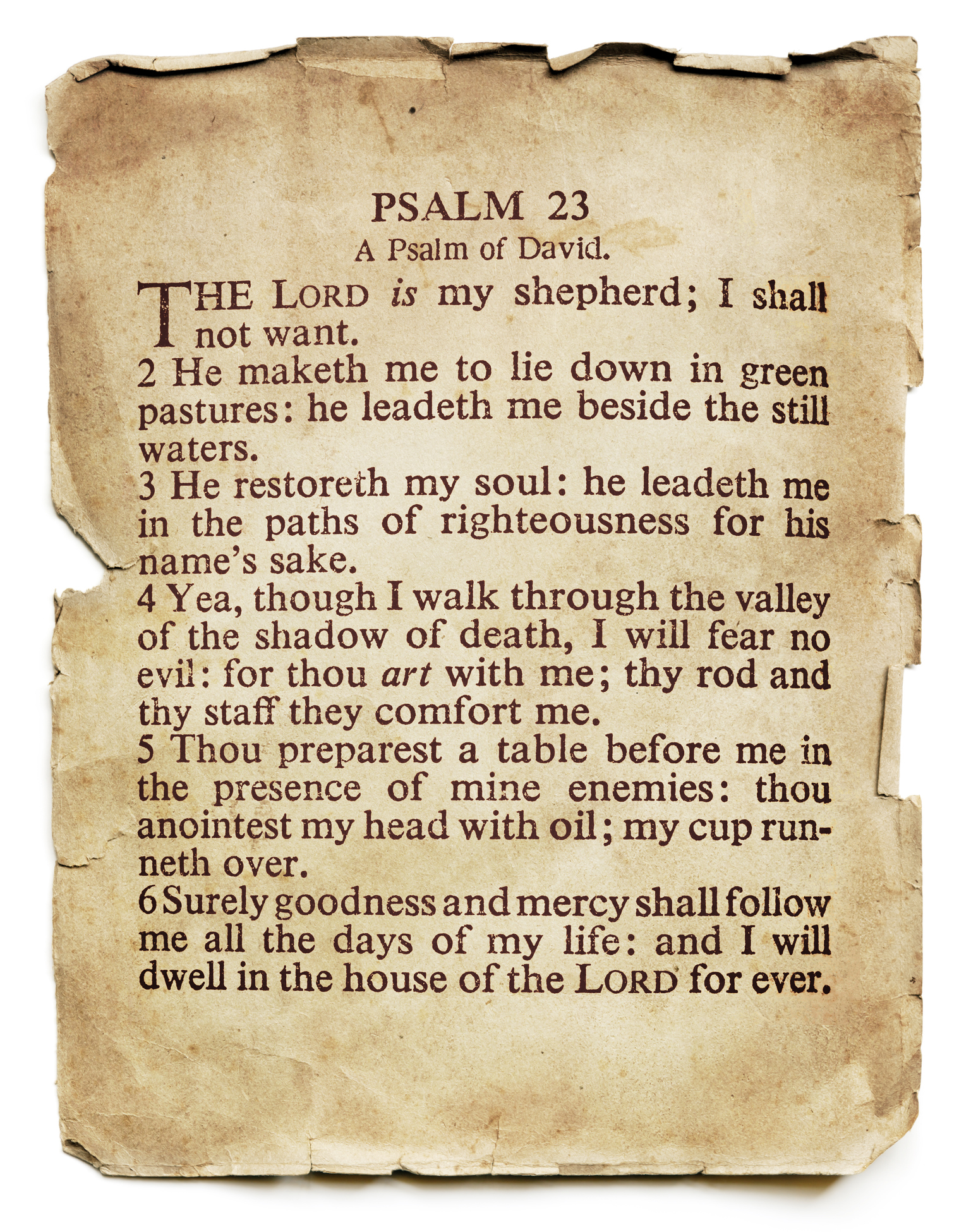 The Lord is my shepherd; I shall not want. 2 He maketh me to lie down in green pastures: he leadeth me beside the still waters. 3 He restoreth my soul: he leadeth me in the paths of righteousness for his name's sake. 4 Yea, though I walk through the valley of the shadow of death, I will fear no evil: for thou art with me; thy rod and thy staff they comfort me. 5 Thou preparest a table before me in the presence of mine enemies: thou anointest my head with oil; my cup runneth over. 6 Surely goodness and mercy shall follow me all the days of my life: and I will dwell in the house of the Lord for ever.

Is Psalm 23 a Cultural Icon?

Many people know these scriptures, even if they wouldn't ever set foot in a church or open their Bible. Psalm 23 is often quoted at funerals. It's a popular passage, referred to as the Shepherd's psalm. Many of the major composers, like Bach, Bernstein, Dvorak, Schubert and more, have set the words to music composed for a particular service.

Modern musicians often refer to Psalm 23, even in genres that are not typically associated with religion. Pink Floyd's "Sheep" makes allusions to the Psalm. Duke Ellington and Mahalia Jackson had one section of "Black, Brown and Beige" which referenced Psalm 23. The Grateful Dead's "Alabama Getaway," Coolio's "Gangsta's Paradise" and Megadeth's "Shadow of Deth" have words from the Psalm, in their own way.

President Bush recited part of the Psalm following 9/11 when he addressed the nation. In the movie "Titanic," The priest reads the Psalm as the ship is sinking. The movie "Pale Rider" has a unique version that demonstrates how difficult the Psalm is to believe. A young actress buries a dog killed by the villains and she recites the Psalm adding her own commentary. "I shall fear no evil but I am afraid,"

The Bible as Literature

The Bible might be a set of Holy Scriptures to Christians, but it also holds many stories which are the foundation of a lot of literature. The Psalms are beautiful poetry about God and His relationship with his believers. Psalm 23 is about the Good Shepherd, which can be seen in many examples of literature. In "Les Miserables," the Bishop of Digne is the good shepherd who forgives Valjean after the latter steals the former's silverware. Essentially, the bishop is responsible for all the good Valjean does.

Father Mulcahy from "M_A_S*H" can be seen as the good shepherd. He's a Catholic priest who seems endlessly compassionate. Mr. Rogers, of "Mister Rogers' Neighborhood" is often compared to the good shepherd. He is kind and good-hearted, tolerant and generous. The good shepherd is a man who is concerned about others, whether he's being tormented and bullied or the local leaders are threatening to reassign him. This theme can be attributed to Psalm 23.

Another popular line from the Psalm is "my cup runneth over." It's used in Eminem's "Rabbit Run" to show how much anger the singer has. Modern performers may not attribute a full cup to a divine being. There is much more to this Psalm than most of us realize.

If you haven't read the Psalms lately, take some time in April to read this beautiful poetry. Most of the Psalms are attributed to David, but it's possible that Moses and unknown authors wrote some of them. Yes, these scriptures are an important part of the liturgy of the church, but they are also part of Judaic traditional worship.