Learning About Mortality From Marcus Aurelius 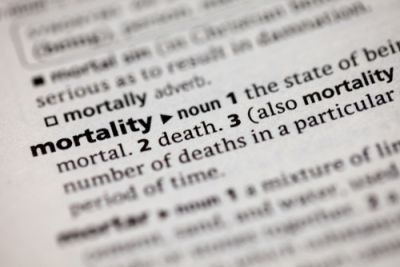 Marcus Aurelius (121–180 AD) was a Roman emperor and Stoic philosopher. He’s most remembered today for his plethora of pithy comments such as the following:

He also had a lot to say about man’s mortality, including this truism: “The longest-lived and those who will die soonest lose the same thing. The present is all that they can give up, since that is all you have, and what you do not have, you cannot lose.”

Centuries before the idea of self-help had even conceptualized, Aurelius and the other Stoics provided foundational toolkits to people so they could refine their thinking processes and improve their mental disciplines. In Aurelius’s case, this amounted to producing a multi-volume book of philosophical writings known collectively as “The Meditations.”

Book II contains the following: “And what dying is — and that if you look at it in the abstract and break down your imaginary ideas of it by logical analysis, you realize that it’s nothing but a process of nature, which only children can be afraid of. (And not only a process of nature but a necessary one.)”

The Absurdity of Immortality

For Aurelius, however, it was even simpler than that. It didn’t matter how long one lived because regardless of length of life, one could only live in the present. In addition, he compiled the following no-nonsense list of basic facts regarding human life:

Maybe not surprisingly, Aurelius believed that philosophy, or as he phrased it, the love of wisdom and mindful living, could get human beings through their “existential precariousness.”

"Which means making sure that the power within stays safe and free from assault, superior to pleasure and pain, doing nothing randomly or dishonestly and with imposture, not dependent on anyone else’s doing something or not doing it. And making sure that it accepts what happens and what it is dealt as coming from the same place it came from. And above all, that it accepts death in a cheerful spirit, as nothing but the dissolution of the elements from which each living thing is composed. If it doesn’t hurt the individual elements to change continually into one another, why are people afraid of all of them changing and separating? It’s a natural thing. And nothing natural is evil."

Marcus Aurelius was clearly ahead of his time — way ahead of it. Admittedly, Stoicism is a philosophy that emphasizes fate, reason, and self-restraint. But Aurelius doesn’t sound like a man resigned to an oppressive and inevitable fate, sitting back waiting for it to happen. Not at all. He married the emperor’s daughter Faustina in 145 AD, and by all accounts they lived quite contentedly and had numerous children together.

Aurelius became emperor in 161 AD and appointed his adopted brother Lucius Versus as co-emperor. When Versus died in 169 AD fighting against German invaders, Aurelius then appointed his son Commodus as co-emperor. The two of them both ruled and fought together against the Roman Empire’s northern enemies. Ultimately Aurelius was killed in battle in 181 AD. Despite his view on immortality, he certainly established his and is remembered to this day.