Is God in Control? 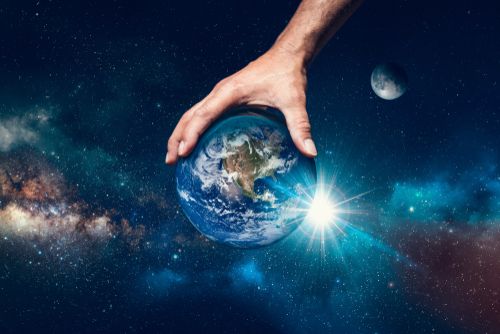 People of most faiths believe in the power of God or some other cosmic power to provide the things they need or want in life. The phrase "God is in control" is bandied about among churchgoers, often intended as comfort. It may give those who hear it a sense that there is some sort of order in an otherwise seemingly chaotic world.

There are a few potential disadvantages of leaning too heavily on the idea of an all-powerful being who bends the world to benefit believers. The comfort often comes with the heavy price of detachment. While perhaps scary at first, adopting an alternative viewpoint can have positive effects.

Some struggle with the idea of another person, benevolent or not, controlling their lives. This is actually a healthy concern. Rather than being an expression of real love, controlling behaviors are often a sign of abuse in personal relationships. Most psychologists would not encourage their clients to stay in a relationship in which the other person is in control. It's typically not good for humans to relinquish power of their choices to someone else.

Complacency is another common outcome of an intense reliance on external power. After all, if God is controlling everything, there's really no need for individuals to get too involved in anything past their own front doors. They may be less likely to address pressing social issues or even notice that they exist. Even actions that could have a profound effect on their own lives may be put off or avoided altogether in the hopes that God or the universe will just make everything work out.

Many ancient scriptures paint God as wielding power. The portrayal of God in the Old Testament in the Bible, for example, is of a being who often uses threat of punishment to get his chosen people to follow his commandments. It's possible, however, that this view of God is based more on the cultural ideology of the time rather than what was actually happening in the realm of the divine. Perhaps a better view of God is that of an advisor rather than dictator. Maybe a God who loves is not one who demands power over believers but one who deliberately gives up power to allow beloved ones to make informed decisions.

If God is not in control, then who is? For those who are used to leaning on the assurance of a deity that has a hand in everything that happens, this may be a frightening thought at first. It's possible that many people of faith find themselves in a rut in their spiritual lives, not because God wills it or because they're not praying enough or don't have enough faith to please the omnipotent being in charge, but rather because they have given away too much of their personal agency. They feel powerless and helpless. Taking back the driver's seat that was always meant to be theirs can alleviate some of these feelings.

People of faith can't always control what happens, and certainly trauma can be detrimental to the psyche. However, they may be able to influence how much of an effect day-to-day events have on them. Many spiritual leaders advise that adopting a mindset that resists burden is a way to set themselves free from unnecessary limits. Don Miguel Ruiz proposes four agreements for those who seek to experience a life of joy:

While some may find comfort in the idea of a God who is in control of the way the world works, over time this belief can have some detrimental outcomes. Reclaiming personal agency and responsibility is a helpful way to get out of any rut this line of thinking may cause.

This lesson we should read often, over and over and teach to others. I believe this tool will assist us all in in following our Lord Jesus/All Mighty God and/or a higher power. I'll stop, or I'll turn this into a sermen. BUT, I'll make it a sermen for our botherd/sisters, to plant more seeds, so We can grow stronger in our beliefs. In our Lord Jesus/All mighty God and our higher power, I bless you all, with my Love and the Love of my Higher Powers! Pastor Ron

I believe that God is a directing force,a guiding force and a reference point. Although we are created in his image we don't all look alike or think in the same way. God expects us to do the very best with the tools he has given us. Even then we may fall short, but we've put forth our very best efforts. God understands this and presents to us other opportunities. God presents us with puzzles to solve, sometimes emence ones, but usually not too far out of our realm. God can intervene when all the pieces of the puzzle are set and ready to be put into place.. We as human being are not to know everything. God will give us sutle hints in the maze that he's created, but he wants us to try to figure it out on our own first. I believe that God does send us signals; maybe a bird, a leaf blowing in a direction, maybe another human being or just a voice in our head. There will always be a sign for he is always there watching.

Judgment, and equity; yea, every good path. They have made them a molten image.

Because The carnal mind is enmity against God: thou shalt make unto it a border of a lying in wait, and as a lion in secret places.

By reason of highness I could not endure. All men of valour; and there escaped not a man.