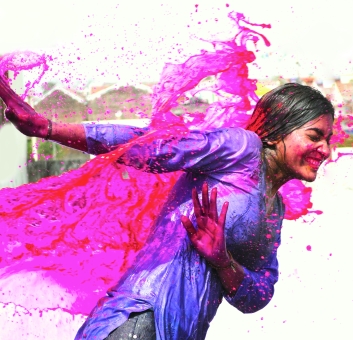 Holi is a Hindu religious festival that occurs each spring in the month of Phalgun of the Hindu calendar, or in February or March in the Gregorian calendar. Hindus observe it all over the world. Mirroring the arrival of spring and its bright colors, Holi is often referred to as the "Festival of Colors."

Holi is based upon the Hindu mythological story of Hiranyakashipu, Prahlada, and Holika. After gaining a boon from Brahma, the demon Hiranyakashipu grows arrogant and demands that his son, Prahlada, recognize him as supreme being. However, Prahlada, a devotee of Vishnu, refuses. Although Hiranyakashipu tries to kill Prahlada many times, he is thwarted by Vishnu's protective power. Finally, Hiranyakashipu places Prahlada on a burning pyre with his sister, Holika, who cannot be harmed by fire. According to some versions of the story, Holika's protection from burning fails because she was given the special power on the condition that she never harm anyone with it; in another version, she sacrificed herself to save Prahlada. In any case, Prahlada emerges unharmed and Holika is burnt to death. Hence, the festival's name, Holi.

Regional influences add a distinctive charm to the celebration of Holi. In some areas, special ragas and folk dances are performed. In many versions a ritual reenactment of Holika's burning is represented by the lighting of bonfires in the village square. In most versions, celebrants exchange colored powders or waters in a celebratory manner. All versions of the festival emphasize fellowship.

Leaving behind the severity of the winter months, the Festival of Colors coincides with the arrival of spring and its renewal of life's creative forces. The festival espouses a spirit of goodwill. It is a time when rivalries and animosities are banished.

Holi is not an exclusively Hindu festival. Holi shares a commonality with religions that recognize the creative renewal of spring celebrations. Hence, it is fertile ground to be explored by faiths that are inclusive, such as that of the Universal Life Church (ULC), that make the process of getting ordained online relatively easy to do.

Holi celebrations are not limited geographically to the area of its traditional origins in the Indian subcontinent. The Indian diaspora has brought the festival to many other regions of the world, such as Africa, Europe, and North America.

Not only Hindus celebrate Holi. For example, in Nepal, many Muslims take part in the festival. In the United States, Holi is celebrated in cities with significant Indian-American populations, including San Jose, San Francisco, Seattle, New York City, Houston, Chicago, and Spanish Fork, Utah. Just like the Indian version of the festival, celebrants throw colorful pigments end enjoy food and fellowship.

Because of Holi's emphasis on fellowship, other faiths, such as that represented by the Universal Life Church, which provides ministers with the opportunity to be ordained online, may embrace the festival as a meaningful way to usher in the spring season.