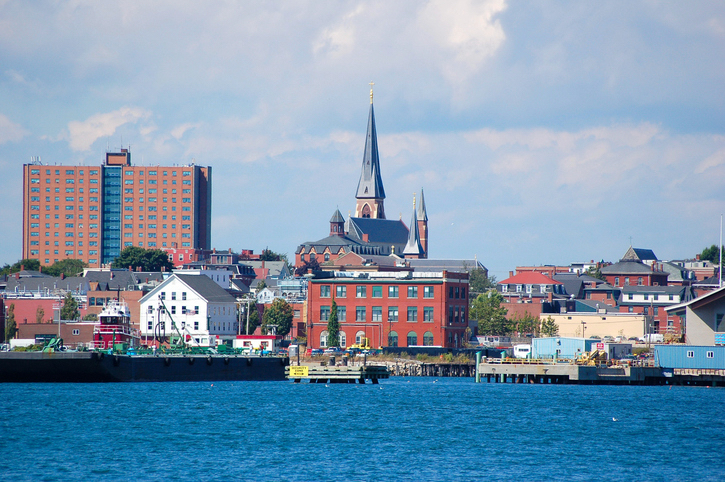 Maine was the 23rd state to join the union in 1820. The state has never produced a United States president, but many famous artists, actors and professional sports players were born in the state. Stephen King, author of "Carrie," calls the state home. Anna Kendrick, an actress who came to fame in "Twilight" was born in Portland, the capital. Portland has been named one of the best cities for empty-nesters, a most livable city in the U.S. and the best adventure town in the East. It's known for craft beer, fishing and financial organizations. However, it does have some interesting churches that give a unique view into the town's heritage. Each of these church buildings have significance in Portland's history. Sadly, many of the original churches have been torn down or lost to damage over the years.

This church is Maine's oldest African-American church building, finished in about 1831. The church is one of the few buildings that survived an 1866 fire, which almost destroyed the city. Around 1917, the building was sold and the congregation dissolved. It was used as a stable, an antique store and as tenement apartments before being seized by the city for unpaid taxes. Fortunately, it was bought for historic preservation in 1998. It is now on the National Register of Historic Places. It was also part of the National Underground Railroad Network to Freedom.

Cathedral of the Immaculate Conception

This cathedral is a Gothic Revival structure, for which construction began in 1866. The fire interrupted the construction. It would not be completed until 1869. It has three steeples, one of which is 204 feet high. The cathedral is the Mother Church of the Diocese of Portland. The building houses beautiful historic and contemporary artwork. Docents are available on the first Sunday of the month after the 10 a.m. Mass to offer tours. You'll hear about the history of the cathedral as well as different elements of the Catholic faith.

The church was built in 1856 in the Gothic style, and it survived the 1866 fire. It is one of the few examples of works of the architect Charles Alexander that is still standing. In 1904, the church hosted the 24th annual convention of the Maine Women's Suffragist Association. Today, the church building still has a place of prominence in the city, but it was decommissioned as a church in 2007. Today, the building houses Grace Restaurant, which uses the original beauty of the church as part of their aesthetic. It is a beautiful place to have an event or just to enjoy dinner and soak up the atmosphere.

The congregation was formed in 1674, one of the earliest groups in the city. The current building was built in 1825 in the federal-style architecture. Some call it one of the finest examples of this style, which was the classicizing architecture in the newly formed United States. Because it was built of granite, it was able to withstand the 1866 fire. The congregation is still very active, being very vocal for civil rights for the LGBT+ community. It is a fabulous building.

St. Paul's was founded as a mission church in 1763. The first building was lost in Revolutionary War. The second church building was destroyed by the 1866 fire. Today's building is purposefully away from the city center. Architect George Pelham designed the Simple Gothic church. It houses some stunning stained-glass windows and other artwork. The rectory is an example of the Gothic Revival style. The church serves the local seagoing community as the Maritime Church, and it has remained true to the Anglican faith.