Foods and Their Meanings Around the World 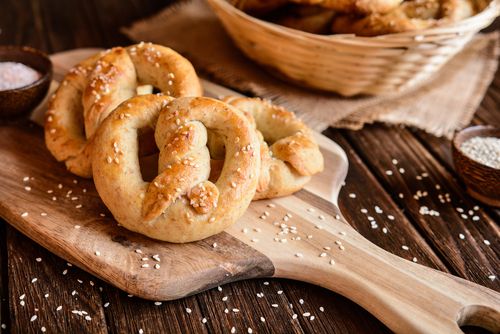 Since ancient times, people have been attributing symbolic meaning to foods. In some cultures, a plate of spaghetti is not just a plate of spaghetti, and in some households, a single piece of fruit may represent luck, fertility or love. Cultures across the globe have and will continue to assign deeper meaning to everyday food items. Whether you’re curious as to the significance of certain foods or want to inject more meaning into your life, read on to learn more.

For most elementary school children, hot cross buns are the snack one sings about when learning to play an instrument. For devout Christians, however, the fluffy cream-coated pastry is a symbol of the Good Friday fast. More specifically, followers eat a hot cross bun to break their fast by consuming a food emblazoned with the crucifix.

What do eggs have to do with Easter? If you’re like many celebrators of this holiday, you may wonder this each year as you hide little candy-filled replicas around your home for your children to find. As it turns out, eggs symbolize resurrection, rejuvenation and immortality. Unfortunately, there is still no answer as to why a giant bunny rabbit leaves them instead of an animal that actually lays eggs, such as a chicken.

In some countries, including Portugal, Spain and Peru, it is believed that by consuming 12 grapes on the New Year, a person can set himself or herself up for a sweet 12 months. If you want to establish a new New Year’s tradition, consider making your first meal of the year one of eggs and 12 grapes. It couldn’t hurt.

If you haven’t had it or heard of it, haggis is a Scottish delicacy made of a sheep’s liver, heart and lungs, all encased in the animal’s stomach lining. Savory spices are mixed in for flavor, including onion, salt, stock, suet and oatmeal. Before you shirk at the thought of eating this cultural dish, consider the fact that it symbolizes simplicity. Though the list of ingredients and the symbol may seem like oxymorons, the belief continues since poet Robert Burns dubbed it as the food representing “Scottish heritage and the virtues of keeping things simple.”

While many Americans avoid noodles out of fear of consuming too many carbs, people of East Asian descent view them as symbols of longevity. During New Year celebrations, individuals look for the longest noodle possible to consume, with the longer ones representing longer lifelines.

At any Rosh Hashanah celebration, you will find dishes of apples and honey. Why? The Jewish culture believes that the combination symbolizes wishes for a sweet new year. Moreover, some people of the culture assert that the apple symbolizes God’s more feminine nature and that by adding honey to it, they can sweeten His disposition.

In China, the word for “pear” is identical to the term for “separation.” Therefore, Chinese people advise against ever sharing a pear with a lover, spouse or friend. Moreover, to give a pear as a gift would be viewed as an insult, especially if you were to give one on the seventh or 15th day of the month. If you made such a faux pas, you would be unwittingly wishing a separation from someone you care for or love.

In many cultures, baklava — a sweet, rich pastry that requires significant time and expense to make — signifies the life of Jesus. It often contains 33 flaky layers, each of which represents a year in Jesus’s life.

Before you grab your next snack, conduct a quick search of its meaning. You’re sure to turn up something interesting.