5 Reasons You Should Reinstate the Family Meal 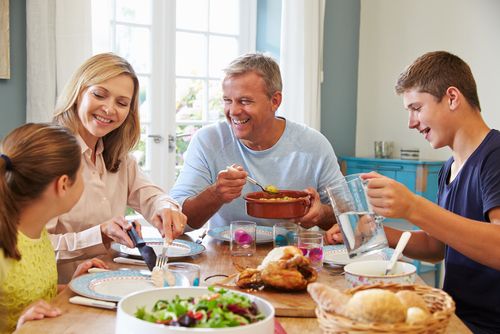 The dinner table has long been the place where parents could impart their values to their children, strengthen their bond as a family and ultimately unite their family in love. Unfortunately, the family dinner is a fast-disappearing tradition.

According to a recent survey, the dinner table is becoming a less popular place to eat. Per the findings, just 40% of families say they eat at the table these days. On the flip side, the couch and the bedroom are becoming increasingly popular locations, with 30% of respondents saying they eat on the couch and one-fifth saying they take their dinners to their bedrooms.

Though it’s not abnormal to eat dinner on the couch or in separate rooms, that doesn’t mean you should do it. Several other studies show that eating together is vital to family dynamics and members’ overall well-being. If you’re not sold, read on for five benefits of the family dinner.

According to a 2012 study by Columbia University, regular family meals around the dinner table increase the likelihood that parents and teenagers will develop strong and healthy relationships. In a world dominated by screens, it can be so easy to feel disconnected from those sitting right next to you. The family dinner forces everyone to put aside their cell phones, laptops, tablets and televisions for a half-hour to an hour every night and reconnect over a meal. Though minimal, this period of uninterrupted attention can drastically improve the familial bond.

The same study also found that kids who eat with their families at least three times a week were two times less likely to earn Cs or worse in school. Children who eat with their families five to seven times a week perform even better, earning mostly As and Bs in school. You can either attribute this to some parents’ exceptional cooking skills, or to the fact that family dinners help establish expectations and values.

Another study, which you can find in the journal Pediatrics, found that children who partake in regular family meals have improved mental health outcomes later in life. Not only are children of families who dine together less likely to develop symptoms of depression in adolescence, but they’re also less likely to engage in illicit drug use. Additionally, children who dine with their parents or caregivers regularly have high levels of self-esteem, which may contribute to the other mental health benefits.

The nutritional benefits of the family dinner are many. According to the American College of Pediatricians, children who have regular meals with their families eat more fruits and veggies, intake less trans and saturated fats, eat fewer fried foods and have overall healthier eating habits. These children are also 35% less likely to engage in destructive eating behaviors as teens and 12% less likely to become obese. Moreover, children who eat regular meals with the family, have routine bedtimes and have limited screen time have an obesity prevalence rate that is 40% lower than that of children not exposed to these positive habits.

Finally, not only is the family dinner table a great place to pass down your values to your children, but also the dinner itself serves as a valuable teaching lesson. Dinner and the activities surrounding it, such as setting the dinner table, serving one another, waiting for your turn to speak and cleaning up, all set examples of how your children should treat others and contribute to the family.

With all the undeniable benefits that the family dinner promises, it wouldn’t make sense for you to not make time for it at least a couple of times a week. If you want to increase your family bond and set your children up for a brighter future, plan your first family meal today.

Everyone has so many different things to do at different times such as football practice,choir, not to mention work!