Scott Cunningham's exhaustive work on magical herbs details the uses of hundreds of common to rare plants used by those practice Wicca. 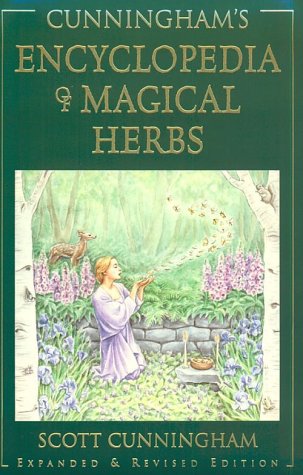 It's no secret that effective medicines don't always come from a bottle. Nature, with its boundless possibilities, nurtures more wild cures than pharmaceutical giants Pfizer and Eli Lilly will ever be able to produce in their sterile laboratories. What many of us probably don't know, however, is that many plants and plant by-products are said by Wiccans to embody magical qualities that can supposedly be harnessed by human beings for a variety of purposes.

Scott Cunningham explores the supernatural aspects of plants in the extensive Encyclopedia of Magical Herbs. This book is considered to be the primary source of information on the magical properties of over 400 plants. Cunningham, a celebrated author of books on Wicca and other alternative religious practices, compiled information on each herb's folk and Latin name, gender, and planet association based on his own research and an astounding 160 other references.

The first 20 pages of Encyclopedia of Magical Herbs is devoted to explaining why herbs supposedly possess magical qualities, how these qualities can be harnessed by Wiccans to cast magic spells, and how herbs should be prepared. Long-time practitioners of Wicca will most likely regard this section as cursory at best, though it does provide a solid outline as to how magical herbs should be approached.

The crux of Encyclopedia of Magical Herbs consists of thorough descriptions of alphabetically-listed magical herbs. A typical entry reads like the following:

Gender: Feminine Planet: Saturn Element: Water Powers: Money, Flying Magical Uses: The poplar buds and leaves are carried to attract money or are added to money incenses. They have also been added to flying ointments, which are used to facilitate astral projection, and so are sometimes placed upon the body or made into an ointment when working with this procedure.

The range of magical herbs found in Encyclopedia of Magical Herbs is surprising - plants as mundane as potatoes and as obscure as Dutchman's breeches are categorically listed and described for Wicca practitioners. Herbs are alphabetically listed by gender, "planetary ruler", "elemental ruler", and magical intention for quick reference in the latter portion of the encyclopedia. The folk names of these magical herbs are also attached to conventional names in this section as well, an addition that is considered to be worth the value of the book in of itself by many Wicca practitioners.

The prolific Cunningham, like his contemporary Silver RavenWolf, devoted his life to writing about Wicca. In all, an astounding 22 Wiccan books on subjects like black magic spells, white magic spells, and divination have been published in his name. "Scott Cunningham Wicca" is essentially a field of Wicca in of itself.

The Universal Life Church Ministries's Wiccan ministers are guaranteed to appreciate this book, especially for those with an interest in magical herbs and magic spells. Encyclopedia of Magical Herbs' popularity speaks to its usefulness - it has sold over 200,000 copies since it was first published in 1985 and has become the de facto guide for Wicca plant magic. Please visit if you are interested in ordering the Encyclopedia of Magical Herbs or other Wiccan supplies from the ULC Ministries or would like to know more information about Wicca and other alternative religions.