The Universal Life Church has been intrigued by "phantom Bible verses" and other phenomena that exemplify using religion to further human ends, here is Bart D. Ehrman's take on it. 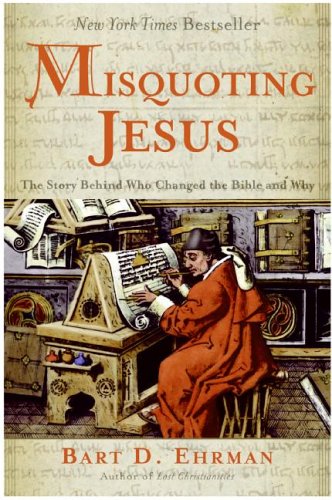 and while not as provocative as his more recent work, [Forged][5], it was met by backlash from a community of believers who take the Bible as they literal word of God.

This book is very good. Ehrman is a great writer, and has been mentioned by the Ministries numerous times before because of his skill. The engaging style of his writing allows the reader to overlook certain arguments that, while not necessarily incorrect, may be somewhat considerably overstated.

The book progresses in a linear matter. Starting first with an explanation of Ehrman and moving through Christianity, it is easy to follow without being too biased. One interesting discussion in Chapter 2 of the book focused on the lack of professional scribes in the earliest days of Christianity. It debunks the idea that early volumes of the Bible had a wide margin of variation because the book was false, but rather because the amateur scribes made simple mistakes. This book also thoroughly discusses why people would interpret the Bible in different ways, something people frequently‚ hypothesize‚ about but rarely research.

Ehrman later describes groups individually which may have changed the Bible and provides a brief explanation as to why this may be. Like any cross cultural study, the chapter leads to cross referencing and re-reading as readers are able to compare and assess the validity of each claim.

Another great thing about this book? Whether or not you agree, you will have something to talk about at the dinner table. The origin of the Bible and its meanings is of interest to many families.

Being one of the country's leading textual scholars, Ehrman provides thorough citations at the end of every chapter. Though some critiques argue that the book itself is divorced from the manuscripts, personally I did not notice that.

Upon preparing the review, I was shocked at some of the comments made by the critics about those reading the book. The hypothesis that those who are prone to believe this book have a mean case of Biblical illiteracy, I believe, is false. This is a common misconception of those who are unbelievers (disbelievers?), that they are uneducated about religion. Countless times, the opposite proves to be true with people choosing not to believe because they have assessed and found the text wanting.

Further, Biblical illiteracy is not limited to those who do not subscribe to a particular dogma or belief, either. Many Christians, even fervent ones, are prone to believe the Bible because of their inability to refute it.

Whatever side of the line you find yourself on, Misquoting Jesus is a great read. Pick one up at the ULC Bookstore today, and if you feel the need, become a pastor online by clicking on the large blue button.