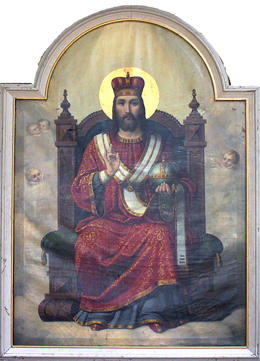 The Jews greatly anticipated Christ's arrival as King. Throughout the Old Testament Scriptures prophets foretold of a Messiah that would save Israel from oppression and bring peace to the earth. Prophets uttered these promises in a cultural context of failed monarchy. Israel's first king, Saul, made many errors in judgment and leadership. The golden years of the David and Solomon kingdoms still contained points of embarrassing failure. King David committed adultery and murder, faced temporary exile from his own son, and constantly endured familial turmoil. King Solomon built the incredible temple, but ultimately led his people astray by introducing forms of idolatry to Israel. After Solomon's reign, the kingdom was divided to Northern and Southern portions. Israel and Judah. Although each half produced a few kings that ruled well and followed the Law as they governed, most kings failed miserably in leadership as well as worship. Idols from foreign nations were introduced and combined with the worship prescribed in the Law. These policies led to invasion by foreign armies, the death of many people, and ultimate deportation of the entire kingdom. Even in the restoration of Israel to Jerusalem and in the rebuilding of the temple and city walls, Israel remained engulfed by the larger empires. Israel needed a king, a deliverer, a restorer. All the prophets announced that one would come. His kingdom would bring peace. His reign would extend to the furthest parts of the earth.

Arrival: Four hundred and thirty years elapsed before any sign of a deliverer appeared. Finally, God gave a message to Zechariah the high priest. An angel announced that Elizabeth his wife would bear a son in her old age and that son, John the Baptist, would prepare the way for the Messiah. Six months later, an angel appeared to Mary and then to Joseph announcing that they would be the parents of a miraculously conceived child. This would be the Messiah. He was to be called Jesus because he would save his people from their sins.

At the appointed time, in the place foretold by the prophets - the village of Bethlehem in Judea, Jesus Christ the Messiah was born in a stable. The announcement of his birth spread to two groups of unlikely people in unique ways. A group of shepherds received the announcement by means of a host of angelic beings singing, "Glory to God in the highest and on earth peace toward men." In a far away Eastern land, a group of wise men received the message through unusual constellations. Following a star, they arrived in Jerusalem two years later and worshiped the Messiah.

Christ's entrance into the public realm did not go as the Jews planned. John did pave the way through the preaching of the kingdom of God and the baptism of repentance, but no mention of a revolutionary political leader. Many thought he was crazy. Christ's public ministry involved an attack of hypocritical religious activity instead of reforming oppressive political anarchy. The people who expected a Messiah to bring redemption became the focal point of Christ's reformation teaching. He did perform incredible miraculous signs like healing cripples, turning water to wine, and even raising people from the dead. But he instructed the people to "give to Ceasar what belongs to Ceasar." And he instructed people to love their enemies. This could not be the king that was so greatly anticipated. Although they greeted him with shouts and waving palm branches, the week of Passover turned into the week of execution as the one who God the Father, John the Baptist, Pilate, and Christ himself identified as King of the Jews was crucified. 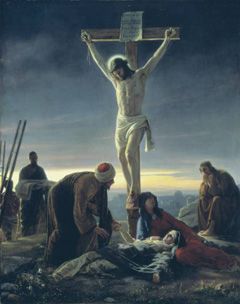 Following the crucifixion, Christ rose from the dead on the first day of the week. This event sparked the evangelization of the world through the twelve apostles. Their message focused on the fact that Christ is King and will judge all people when he comes again. This message cut to the heart of thousands and many turned to Christ as their personal king. The New Testament also records that several surrendered their lives for the name of Christ, believing that to be the course their Kind desired them to take.

Revelation unfolds the story of the final coming of Christ. He will return as the King of the world. All nations will be subjected to His authority and his arch-enemy Satan will be entirely defeated. In the reality of this hope, many Christians live day by day seeking to please their coming King.