An Impressive Collection of Deviant Thoughts

If you are an atheist who is looking to reinforce old ideas or a believer who has never met an atheist before and wants to know what they think, The Atheist's Bible may be the book 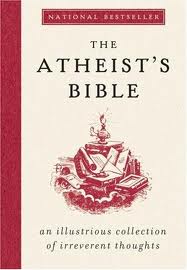 for you. The Atheist's Bible:Ã‚ an illustrious collection of irreverent thoughts compiled and edited by Joan Konner is exactly what it claims to be, a collection of thoughts that question, discount and sometimes condemn the beliefs of the Christian religion. What the book lacks in exposition it makes up for in wit and quips that will resonate with almost every non-believer. Granted, if you are looking for a book to explain the ins and outs of atheism or go in deep into arguments, this probably isn't the book for you. However, if you would simply like a book of thoughts to chew on or something to put on the coffee table capable of starting conversations, this is the book for you. Despite this book's simple prose and nature, it is not a light read as Konner draws from famous thoughts hailing from almost every corner of the world throughout history, even Homer Simpson. The author does a great job blending contemporary disputes with quotes from older heretics in this case for atheism.

Divided into thirty three books, The Atheist's Bibles does not mock the Bible but does seek to mimic it, with some deviation. Though most of the chapters are named after religious ideas or concepts, few are actually books of the Bible. Starting with Genesis and going through chapters named things like "the Book of Questions" and "the Book of Laughter", Konner covers most topics of non-religion thoroughly. She even includes her own version of the Gospels like the "book of Mark (Twain)" and the "book of Friedrich (Nietzsche)." Konner also does a great job of representing more than the usual atheist and agnostic activists like Sam Harris and Richard Dawkins; many of the United States' founding fathers are also quoted in the book. Two people that are conspicuously missing are both God and his son, Jesus Christ. Being a huge fan of Oscar Wilde, my personal favorite quote in the book was "when I think of all the harm (the Bible) has done, I despair of ever writing anything to equal it."

This book highlights a point that many are afraid to, why are so many great thinkers and influential academics atheists? Personally, I attribute this to the fact that religion does not allow for the freedom of thought that atheism does. With many of the Founding Fathers calling Jesus Christ foolish, this book calls into question the religion our country is founded on. If Puritans came to the New World seeking religious freedom and freedom, and with many of the Founding Fathers abhorrent of religion, is the United States really a Christian nation, as many contemporary politicians assert?

Another point this book manages to use few words to thoroughly highlight is how, even with monumental advances in science, people have become more fundamentally religious with the passing of time. People now attribute most things, both disasters and blessings, to the will of God whereas 300 years ago, great thinkers were dispelling the myth of miracles. It would almost seem as though people are less willing than ever to discuss and debate Biblical issues, as though the science of the time could actually disprove their beliefs and this makes believers unwilling to discuss it. In this way, you can use an unexamined idea to assert almost any "truth".

At the ULC Ministries we love a good religious debate and would love to hear your thoughts and comments. If you are an atheist, agnostic or otherwise not affiliated with any religion we welcome your participation in the discussion as well. Finally, should you be looking to get ordained online or become a pastor online, please visit us at getordained.org for more information.

Should you be looking to purchase The Atheist's Bible, you can find it at the ULC Bookstore.