Should religion and politics mix? They inevitably will, but the question is where and how.

A debate has been raging, a "culture war" has been decreed and some are asking themselves "what would Jesus do?" while others are completely ignoring him. Religion and 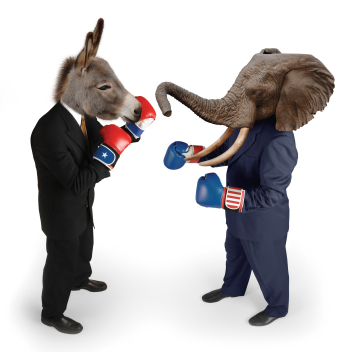 politics in America liter nightly news and morning headlines in many countries, but how do the two really relate?

A Gallup Poll on religion that has been conducted over the last 40 years found that 8 in 10 Americans believe the Bible was at least divinely inspired. However, over the course of the last three decades those who believe the Word was dictated directly by their deity are fewer and farther between. Ã‚ Today, only 3 in 10 Americans believe the words in the Bible were actually from God and should be taken literally. This percentage is down slightly over the last forty years, having dropped about eight points.

This means seven in ten people do not believe the Bible should be taken literally but though a minority, the religious right is a powerful caucus. The survey found that Protestants tend to be literalists more often than Catholics. With twice as many Protestants in the United States, many of them prominent, we are likely to see, and have seen, those in power pander to this large group. The 2012 election will be wrought with examples of this pandering. Presidential candidate Michelle Bachmann is a product of this movement and an example of how powerful it is becoming.

If only the Bible were easier to literally and consistently interpret, it may be easier to legislate based off of it.

The Gallup Poll also found that education plays an extremely important role in this equation.Ã‚ 46% of people with a high school diploma take the Bible and its passages literally versus only 15% of college graduates. Explanations surrounding this vary however with a minority of people attending college it would appear that nonbelievers because of their education are far outnumbered.

How religion dictates politics, or political ideology, is fairly inherent in America at this point. 46% of conservatives take the Bible literally compared to only 14% of liberals. This effectively leaves people with little in common and makes compromise difficult as shared ground on which both can stand nearly impossible to find.

The polarized ideologies make for extremely cutthroat partisan politics with little middle ground and the role of religion in politics very complicated. With Democrats divorcing themselves from the spirituality that defines much of their constituency, the fractures in the party are apparent and drawn along spiritual lines. This makes the party increasingly ineffective as the supposed culture war rages on. With much of the political base of the Democrats being black or Latino, groups that statistically tend to be more religious, Democrats often lose votes on social issues.

Interestingly enough though it seems to be white Americans who have the most cohesive political and religious beliefs with white Republicans believe the Bible is the literal word of God. The vast majority of white Democrats believe the Bible to be a book of fables. 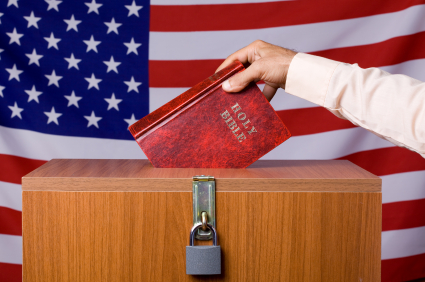 The very beating heart of the religion of many is being questioned, if not derogated, by some (many) Democrats. At the same time that very book is being used to oppress the rights of certain and singled out groups of Americans. This toxic relationship America seems to have with the Bible defeats the very purpose of the book, which is to convey a message of love and forgiveness. Until this complicated relationship manages to sort itself out, the heated debate that results in nothing but anger will continue.

Is, as many theorize, America going to Hell? Only time will tell. (Un)fortunately, because of the inability of religious Republicans and secular Democrats to work together, it can be certain that no one is going anywhere very quickly.