Who Is Saint Lucy and Why Is She Celebrated in December? 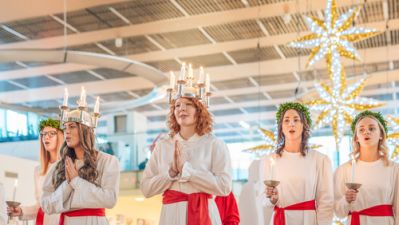 On December 13, the Feast of Saint Lucia, or St. Lucy’s Day, is observed by Protestants and Catholics, typically in Scandinavian countries, such as Norway and Sweden, but also in Italy. Her feast day is associated with the Advent season, bringing the light of Christianity to the world. Learn more about her story and why people celebrate her life still today.

Lucy was born in about 283 AD. It’s speculated that her father was Roman and her mother was Greek. Lucy’s father died when she was young, leaving her and her mother without a protector. But Lucy’s parents were noble and rich, so she fared better than many children of the time. Lucy made a promise to God for her wealth and virginity. Lucy’s mother was unaware of the promise and betrothed her daughter to a pagan man.

Lucy’s mother suffered from a bleeding disorder, but Lucy prayed to an earlier martyr for healing. Legend says that Lucy’s mother was cured. Lucy requested that her mother allow her to give her riches to the poor. It’s thought that Lucy wore a wreath on her head with candles to light the way through the catacombs to distribute alms to the poor. This let her carry as much food as she could.

When Lucy’s betrothed heard of her generosity, he denounced her as a Christian. The governor of Syracuse ordered Lucy to sacrifice to the pagan gods of the time. She refused. The governor ordered her to be defiled in a brothel, but the guards were unable to move her or take her away. They tried to set her on fire, but she would not burn. Finally, she was martyred by the sword. Later stories said that she was tortured and had her eyes gouged out.

Lucy died a Christian martyr in about 304. By the sixth century, she was venerated in the Catholic Church. Her fame spread throughout Europe. She is the patron saint of the blind, and her name shares a root with the Latin word for light, which is another reason that her feast day is in the darkness of winter.

In Scandinavian countries, Saint Lucy is typically represented by a woman in a white dress with a red sash, which symbolizes the Christian’s baptismal robe and the blood from her martyrdom. She will have a wreath of candles on her head and carry cookies or bread. In Italy, it’s common to have whole grains instead of bread for her celebration. Some European countries plant wheat grains on Saint Lucia’s day, which is symbolic of the new life born on Christmas day.

Saint Lucia’s Day is often celebrated as a secular holiday. Children may dress in traditional garb, with girls wearing white robes and red sashes and boys playing the role of other martyrs, such as Saint Stephan. They may walk through nursing homes and retirement homes handing out Lucia buns.

Lucy is remembered around the world. She’s had many places named in her honor: St. Lucia, Queensland, Australia; Port Saint Lucie, Florida; and the Caribbean island, St. Lucia. In Philadelphia, there is a school for the blind named in her honor. Venice, Italy, has a railway station that remembers Santa Lucia. Churches around the world bear her name.

Lucy died during the Diocletianic Persecution. It was the most severe period of persecution for Christians in the Roman Empire. It’s likely that it wasn’t her Christianity that killed her, but her generosity to Christians. If she hadn’t given her mother’s riches to the poor, her bridegroom may not have cared to denounce her to the governor. It’s nice that she is remembered today.