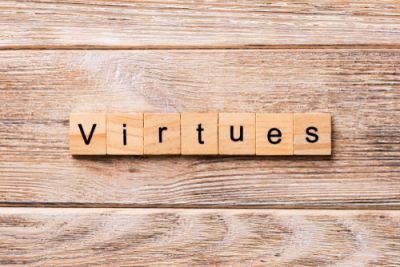 As with so many extremely broad questions, the answer to this one depends on who you ask. For instance, Merriam-Webster defines virtue as the following:

No matter who you ask, however, they’ll undoubtedly start talking about the human traits that make for a morally good person. In other words, the things we do to help us do what is right and avoid doing what is wrong.

Plato defined virtue as containing four separate characteristics: temperance, prudence, courage, and justice. Aristotle, on the other hand, defined virtue as a “golden mean,” the more or less middle-of-the-road area between deficiency and excess of any given trait. For example, the virtue of generosity resides between the two extremes of being miserly and being profligate. Similarly, the virtue of courage resides somewhere between the extremes of cowardliness and foolhardiness.

Seneca, an early Roman philosopher, equated virtue with prudence. To his way of thinking, a prudent person acts the same way as a virtuous person, and the two are indistinguishable. Plato himself evolved his thinking of virtue, ultimately deciding that people act only in ways that they believe will bring them the maximum good, thereby equating virtue with prudence. But he went a step further. Since he determined that virtue can be taught, he also equated it with wisdom.

Early Christianity apparently agreed with Plato, because it declared his four virtues to be the cardinal virtues. But it also added faith, hope, and charity (i.e., love) as the three theological virtues.

In 410 CE, Aurelius Prudentius Clemens, the early Christian poet, listed the following as the most important virtues:

During the Middle Ages, Charlemagne read off an extensive list of virtues at his coronation as Holy Roman Emperor. His list began with “Love God” and ended with “Defend the Church and promote her cause,” but also included prohibitions against perjury, theft, and envy, as well as an admonition to “love your neighbor.”

As you might expect, philosophers have had a field day with the idea of virtue. For Rationalist philosopher René Descartes, virtue meant correct reasoning. For Immanuel Kant, it meant benevolence, good-heartedness, and sympathy.

In contrast, Friedrich Nietzsche based his virtues on his belief that people who are weak and slavish view the virtues of strong people as nothing more than vices. Consequently, Nietzsche identified “great men,” such as Goethe and Beethoven, and touted their virtues as follows:

From Benjamin Franklin to Ayn Rand

In his autobiography, Benjamin Franklin, one of our country’s most important founding fathers, listed thirteen virtues needed for “moral perfection.” But in true Franklin style, he added such quintessential examples as these:

For Ayn Rand, novelist extraordinaire and founder of Objectivism, the primary, virtually the only, virtue is rationality. Or as Rand herself put it, “The recognition and acceptance of reason as one’s only source of knowledge, one’s only judge of values and one's only guide to action.”

So what is virtue? Apparently anything you want it to be as long as it makes you happy and doesn’t harm anyone else.