What Is the Difference Between Atheism and Agnosticism? 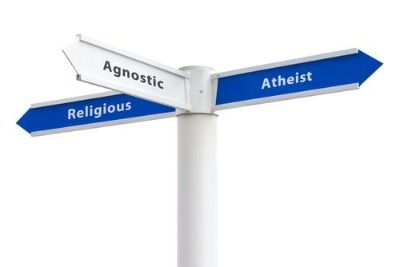 Even people who are not religious or don’t follow a traditional faith like to put labels on themselves. It’s human nature. “I’m vegan.” “I’m Hispanic.” “I’m a jogger/biker/swimmer/model.” People give themselves labels for everything, whether it’s necessary or not. Two labels people today often use interchangeably to describe what they believe or, rather, what they don’t believe, are “atheism” and “agnosticism.” However, to use them interchangeably is incorrect. If you don’t follow traditional religion, or if you struggle to identify what you believe, consider the true meaning of each of these terms to decide if one — or both — is right for you.

For starters, atheism is not necessarily a belief system; some claim its "followers" actively believe that there is no god while others argue it is simply a lack of belief in a god. In fact, etymologically speaking, the word means “not, or no god.” People within the atheism camp live with differing levels of certainty. Some will deny, with conviction, that any god exists, and provide evidence to support their claim. Others will say they do not believe that a god exists but will not claim to have any evidence of their assertion. Regardless of where a person falls in this camp, the common denominator is that they do not believe in the existence of any god.

Agnosticism is not a belief system but rather a theory of knowledge. “Agnostic” means “not, or no knowledge.” An agnostic person does not claim to know whether or not a god exists, because he or she asserts that humans do not possess the resources, intellect or capabilities to know anything beyond the physical realm and into the metaphysical. Therefore, agnostics also do not claim to understand the existence of angels, spirits, demons, gods, etc. A person who leans more toward agnosticism can further declare themselves as being either an agnostic theist or an agnostic atheist.

Essentially, agnostics, regardless of their stance on gods and higher powers, do not claim to know what is true and what is not. Agnostics base their assertions on logic and proven knowledge. They will tend not tell others they are right or wrong about their beliefs because they are convinced that no one (including themselves) can know for sure.

The term agnosticism was popularized when some people finally realized that individuals do not have to claim to have all the answers. It is not, despite popular belief, a term used to describe someone who has found some alternative between theism and atheism, or between the presence and absence of belief.

Atheism and Agnosticism Are Not Mutually Exclusive

Many people think they must be either atheist or agnostic if they don’t believe or claim to know, but that they cannot be both. This assumption implies that knowledge and belief are mutually exclusive, which they are not. In fact, they are very much compatible. Many people who rely on science and education often choose not to believe because of a lack of knowledge. On the other end of the spectrum are the people who need to believe because they don’t know, and the not-knowing is scary. A person can be an atheist, agnostic atheist or even agnostic theist.

If you firmly believe that a god or gods do not exist, you’re an atheist. However, if you don’t know what to think because you don’t have enough “evidence,” chances are you’re an agnostic. Whatever label you assign to yourself, don’t let it limit your spiritual exploration or search for answers.

As an agnostic, when someone ask what it means I tell them I believe in the possibility of g/God/s