What Is Holy Week? 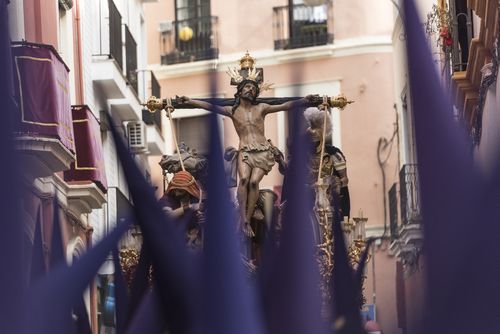 For many devout followers, Easter entails much more than a single day on which individuals find baskets, hunt for eggs and gather with family. Rather, Easter really begins on Ash Wednesday, continues through Lent and comes to a head during Holy Week. Though many people are familiar with Ash Wednesday and Lent, not many are familiar with Holy Week.

Holy Week is the week leading up to the actual Easter holiday. Followers use the week to remember the crucifixion of Jesus Christ and the events immediately preceding it. You can find biblical accounts of these events throughout all four Gospels, which are replete with information on the final words and acts that made up Jesus’s life.

The Sunday before Easter, or Palm Sunday, signifies Jesus’s return to Jerusalem. According to biblical lore, devotees welcomed Jesus back by lining his path with palm fronds. Palm fronds are an ancient symbol of hope, and the peoples’ use of them signified their hope that Jesus would return Israel to its former glory.

Jesus, like thousands of others, returned to Jerusalem to celebrate Passover. The temple was buzzing with activity, which included the sale and price gouging of sacrificial animals. Jesus, outraged by vendors’ greed, overturned their tables. Jesus was also affronted by the sacrificial element. He entered the temple not with the intent to make a sacrifice but rather with the intent to purify the house of God. His actions, and the reasons behind them, offended religious authority.

Though the events in the days following Jesus’s display of rebellion are unclear, it is said that he spent much of his time in the temple preaching to the crowds. Already feeling threatened, religious authorities devised a plan to trap him. They put him through an interrogation, during which they asked a series of tricky questions, the answers to which they hoped would trap Jesus into committing blaspheme.

Jesus’s responses during this final interrogation turned the tides of Christianity. It was then that Jesus revealed the signs of the end of the age, unveiled the greatest commandment and discussed his famous parables.

The Thursday before Easter, “Maundy Thursday,” is the day on which Jesus ate his infamous “Last Supper.” This day, and the supper in particular, hold great significance, as during the final meal, Jesus communicated to his disciples his awareness of his impending death and, ominously, his knowledge that one of his betrayers (Judas) was also a disciple. It is the Last Supper that Christians today commemorate with Holy Communion.

During the meal, Jesus also did something peculiar: He washed the feet of his disciples. This act was typically reserved for the lowliest of servants, and Jesus used this as a teachable moment.

Following supper, Jesus and three disciples went out to the garden to pray and yield their will to God. It was there that an armed crowd, led by Judas, found and arrested him.

Once arrested, Jesus underwent a series of torture and mockery. At 9:00 am on Friday, he was nailed to the cross and left to die.

Three days later, after dying and being buried in a tomb borrowed from a wealthy man, Jesus was raised to life and left his tomb. This is how history tells it, despite the fact that Jesus’s tomb was guarded by armed soldiers and sealed. Later, it is said that Jesus revealed himself to his disciples in a demonstration of divinity. During each reveal, he instructed his disciples to conduct what Christians call the “Great Commission.”