What Do the Easter Bunny and Easter Eggs Have To Do With Jesus? 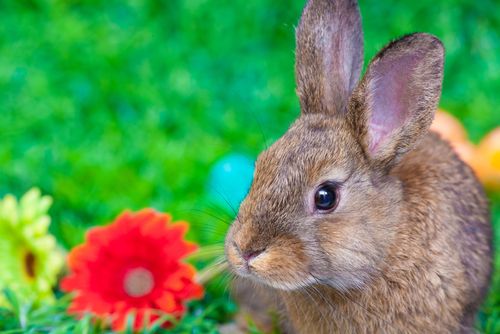 Every holiday has its symbol. Halloween’s is the pumpkin. Thanksgiving’s is the turkey. Christmas is characterized by Santa Claus. Valentine’s Day has the heart. And then there’s Easter. For Easter, people throughout the Western culture (in particular, America) decorate their homes with Easter bunnies and eggs to commemorate the rising of Jesus. While the pumpkin, turkey, Old St. Nick and the heart all make sense, the Easter Bunny decidedly does not.

Though Easter traditions vary from culture to culture and home to home, one thing remains pretty consistent, and that is the presence of the bunny. Rumor has it that the Easter Bunny brings lucky children baskets full of goodies on Easter morning. The tradition is so strong that the bunny and its eggs have become the official symbols of the Christian holiday. But why? How did this happen? What do a bunny and eggs have to do with Jesus?

The Significance of Easter

To understand the significance of the Easter Bunny, you must first understand the significance of the Easter holiday. Easter is a Christian holiday that celebrates the resurrection of Jesus on the third day following his crucifixion. Together, the death and resurrection of Jesus Christ form the basis of the Christian faith and all its traditions. It is safe to say that without Christ’s rebirth, there would be no Christianity. It makes sense then that Easter celebrations date back thousands of years, possibly to ancient Syria and Mesopotamia.

In ancient Syria and Mesopotamia, individuals believed that the hare symbolized the death and rebirth of its people. Due to the similarities between hares and rabbits, the symbolism shifted to the smaller animal. However, the meaning remained the same. Gravestones in the Greco-Roman world depict images of rabbits, which is likely due to the connection to death and rebirth.

In addition to symbolizing death and rebirth, hares and rabbits also embodied sexual desire and lust. Ancient civilizations often viewed rabbits as servants of the gods of life, love, death and immortality. Given these denotations, hares became the official symbols of spring, which, in the Northern hemisphere, signifies rebirth, regrowth and fertility.

The Introduction of the Easter Bunny

It wasn’t until the 16th or 17th century that a direct link between Easter and the hare/rabbit officially developed. Some trace the association to the German fertility goddess Eostra, who, in many regions, is also associated with hares. Modern scholars, however, suggest that the word Easter comes from the Norse term ostern, which means “spring.” Research sides heavily with modern scholars, as evidence suggests that Eostra’s name also derives from the local term.

As for the other traditional Easter decorations — lilies, eggs and rabbits — the theory is that they became firmly attached to the Christian holiday because they too symbolize spring. These modern decorations are indicative of modern society’s view and understanding of the holiday.

As with most Christian holidays, Easter has become heavily commercialized. Though people across America and the Western world continue to celebrate with the symbols established in the 16th and 17th centuries, the number of individuals who celebrate the religious significance behind the holiday has been on a sharp decline. This may, in large part, contribute to the confusion surrounding the significance of the Easter Bunny.

That said, in the end, the rabbit has nothing to do with Jesus and his resurrection, at least not directly. Neither the Bible nor Christianity’s teachings link the two together. However, the underlying pagan associations between the rabbit and the hare and life, death, fertility, lust and rebirth remain strong. Couple this with the strong belief that Christ overcame death, and the symbolic bunny is not so out of place.