Wall Street and the Golden Calf

Jesus said: "No one can serve two masters; for a slave will either hate the one and love the other, or be devoted to the one and despise the other. You cannot serve God and wealth." 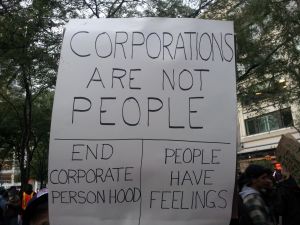 Here in Seattle, we are seemingly far removed from the Occupation of Wall Street. But , Wall Street, as we all know has had some far reaching effects on everyone's life over the last three or four years. As the protest grew from a small ragtag group of the usual Seattle protesters to a larger and more cohesive force, people began taking notice. News crews were dispatched and indeed, when one of our ministers visited the protest he was asked if he cared to comment on their disruptive nature. When he asked why the reporter was concerned about their disruptive nature, he was told that a Teavana store in the Westlake mall had complained the protests were bad for their business and driving customers away.

Greed. A few have a lot of money and continue to make more and many, some say 99%, 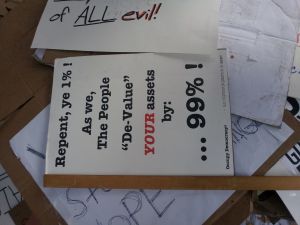 have little to nothing in comparison. As the protest gains strength and more attention in the news, it seems that protesters with a spiritual perspective on things have now been adding to the occupation. Indeed, a few days ago, some protesters carried an effigy of the Golden Calf,made from paper mache, on their shoulders, seemingly to draw a comparison between the calf from the Bible and the bull on Wall Street.

Let's take a moment to look at the story in Exodus, a book that predates Jesus. The people were upset with Moses when he had taken them out of the wilderness. So Aaron was summoned to leadership and he plotted an overthrow of Moses by building a new altar, a golden calf, made from the jewelry of the people. Everyone had a big expensive party in front of their handmade idol until Moses came back and destroyed the calf after which he begged everyone to repent for their idolatry. When they did so, God promised not to destroy them.

While religion has polarized many different groups of people in the US, it would seem that 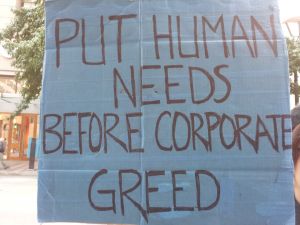 some Christians are finding unity in their opposition to greed. Not only in the interpretation of the Golden Calf as the bull on Wall Street, but in the basic message of Jesus. Jesus would stand with the poor. Jesus championed the underdog. Jesus in Matthew was told to pay taxes to the Roman authorities and in response he stated "Render unto Caesar the things which are Caesar's, and unto God the things that are God's". It's possible that the Wall Street protests speak to the basic tenants of Christ, that this time may be a reminder to those committed to spiritual values that putting money first is most definitely not what Jesus would do.