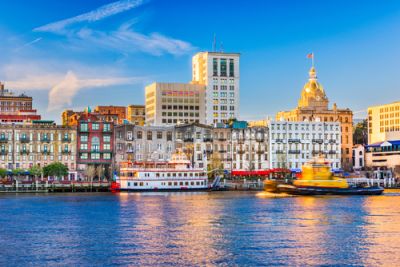 In 2016, Travel & Leisure named Savannah, Georgia, number 5 on their “Best Cities for Culture in the United States” list. The city is the oldest in the state of Georgia, established in 1733. During the American Revolution and the Civil War, Savannah was a key port city. Today, it’s still an important seaport on the Atlantic. It hosted the sailing competitions during the 1996 Summer Olympics. There’s a lot to discover in this historic city.

This church claims to be one of the first black Baptist congregations in the United States. It was formally organized in 1788, but members of the congregation began meeting as early as 1773. The church served as a stop on the Underground Railroad during the Civil War. During the Civil Rights Movement, the church held weekly meetings for Savannah residents. The upstairs balcony still has some of the original pews made by slaves. The building is listed on the National Register of Historic Places. Visit the museum and enjoy a tour to really learn more about the interesting place it holds in history.

This congregation dates to 1735. The synagogue was constructed in the Gothic style, which is rare. The founders of the congregation were Spanish and Portuguese Jews who had escaped the Spanish Inquisition. George Washington sent the congregation a letter, another rarity for the time. Tours are offered to visitors on most days, except federal and Jewish holidays. One of the highlights is a Holocaust Torah. It’s a wonderful place to experience Jewish culture.

This cemetery offers beautiful gardens as the final resting place of some of the most notable residents of Savannah. Juliet Gordon Low, the founder of the Girl Scouts of the USA, is interred in the cemetery. One section is devoted to slaves and freed blacks from the area. It’s a place to experience history in a unique fashion.

Christ Church bills itself as the oldest house of worship founded in Georgia. One of its early rectors was Rev. John Wesley, the Methodist evangelist. The bell in the tower was made by Revere and Son of Boston. It’s almost 200 years old and still in use today. The present building was constructed in 1838. It offers a lot of history within the sanctuary.

This museum complex features three different sites. The Jepsen Center is a fairly newer building that houses art and focuses on architecture. Telfair Academy has historic paintings, furniture, paper and sculptures from the past. The Owens-Thomas House and Slave Quarters is a historic home with interactive exhibits to learn about the relationship between the free and enslaved persons who lived there 200 years ago. The three museums are close enough to walk between and offer a unique look into Savannah’s history.

This museum is housed in a historic 1853 structure that was a railway depot. Today, it’s an award-winning art museum with contemporary and historic artwork that has breathed new life into what was once dilapidated ruins. The museum has many galleries to showcase students’ art and works by the masters.

This historic site offers over three centuries of history. It was originally the estate of Nobel Jones, who arrived with James Oglethorpe and the first settlers who came from England. Jones was a carpenter, who served the colony as a doctor, surveyor and constable. Although Jones died at the beginning of the American Revolution, his plantation survived until 1973, when it was acquired by the state. It’s a great place to see how the early settlers lived. The site hosts many special events through the year that focus on special times in history.

Savannah, Georgia, has a long and unique history. Visit the city to experience its cultural and historic landmarks for yourself.