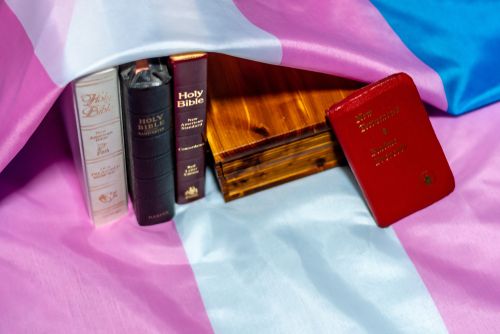 In a new document issued this past summer, the Vatican declared in a decidedly harsh fashion that gender is a matter of biological birth, not personal choice, and can’t be changed. Bearing the title “Male and Female He Created Them: Towards a Path of Dialogue on the Question of Gender in Education,” the 30-page document goes further than that, declaring that attempting to change one’s gender is attempting to “annihilate the concept of nature.”

Theoretically, the document is aimed at Catholic educators, bishops, priests, and others who deal with and counsel young Catholics, especially regarding sexuality. It thoroughly smears what it calls “the ideology. . .of gender theory” that “denies the difference and reciprocity in nature of a man and a woman and envisages a society without sexual differences, thereby eliminating the anthropological basis.”

Not surprisingly, the LGBTQ community within the Catholic Church has responded just as vociferously. New Ways Ministry, one of the many organizations whose mission is to reconcile LBGTQ Catholics and the church to which they belong, deemed the Vatican document “a damaging tool that will be used to oppress and harm” not only Catholic transgenders, gays, lesbians, and bisexuals, but the wider LBGTQ community as well.

New Ways Ministry also accused the Vatican of filling its document with misinformation that “will cause families to reject their children, and . . . will increase alienation of LGBT people from the Church.” It ended its vitriolic attack by stating:

“The only truth the document reveals is that the Vatican remains ill-equipped to discuss gender and sexuality in the modern world. By ignoring new scientific understandings of gender identity, and by refusing to engage in dialogue with LGBT people about their lived experiences of self-understanding and faith, the Vatican remains in the dark ages, promoting a false teaching that relies on myth, rumor, and falsehoods. Because they have not consulted science or people’s experiences, the Vatican’s theology on gender is deficient and flawed. It relies on categories of male and female that were shaped centuries ago in oppressive and repressive cultures.”

It is estimated that transgenders account for only 0.6% of the U.S. population, and there are no estimates as to how many of them are Catholics. Nevertheless, the Public Religion Research Institute found that 68% of U.S. Catholics declare that their supportive feelings toward transgenders and their rights have increased during the past five years.

Five transgender Catholics (using their first names only) recently shared their personal reactions to the Vatican’s document, which they all believe rejects their gender identity. Thomas states it this way:

“There is no evidence in this document that its authors have spent any time listening to transgender or intersex people. ‘Gender identity’ is not about choosing which gender you would rather be, but noticing which gender you already are, as a gift given to you by God.”

Colleen sums up her feelings as follows:

“All in all, this is a rear-guard attempt to defend a hyper-conservative Catholic view that, especially in light of the sex abuse/church cover-up scandal, seems almost laughable were it not so tragic.”

Scotty adds, “I’m irritated that once again the church has chosen to diminish and limit my lived experience while saying that they are listening. They’re not.”

And Hilary? She states that she’s “ready for dialogue” as called for in the Vatican document, but adds:

“There will be a few transgender Catholics who will take them at their word and use the title to promote a dialogue. If they want to have one, I am ready. But there will be many more who will finally concede that the church is just too irrelevant to life in the 21st century and will find other spiritual homes.”

Meanwhile, both U.S. and British Catholic bishops have welcomed the Vatican’s document. Bishop Michael Barber, who serves as chairman of the U.S. bishops’ Committee for Catholic Education, declared: “The clarity of church teaching, rooted in the equal dignity of men and women as created by God, provides the light of truth and compassion that is most needed in our world today.”

It therefore appears that, at least when it comes to gender issues, a huge disconnect exists between the church hierarchy and everyday Catholics. Unfortunately, possible “dialogue” aside, it seems highly unlikely that the two sides will meaningfully come together any time soon.

What this will result in is in a number of transgender Catholics seeing no choice but to leave their church and their faith.

Again, they have ignored science and misconstrued the issue. No one "chooses" to be gay or transgender. It is an awakening to a suppressed identify that has always existed within that individual.

I am shocked that in such an enlightened age, the Catholic Church has chosen to take such a giant step backward, making themselves increasingly irrelevant to their followers and detached from reality.

This is shameful. It is not what Jesus would have done. His ministry was inclusive of outsiders and the marginalized. As secular society has become more welcoming of the LGBTQ+ community, the Catholic church is pushing them away, telling them, "You don't fit our mold. You are wrong."

The Pope is but a man. And here, he is mostly certainly wrong. We are all God's children. Let us not alienate those different from ourselves simply because we do not understand them.

Science tells us these variations are natural. It is God's way of testing our compassion and tolerance of others who are unlike. On this test, Rome--you have most certainly failed your Creator and Your Savior. The Holy Spirit was nowhere to be found in your heart when this decision was made.