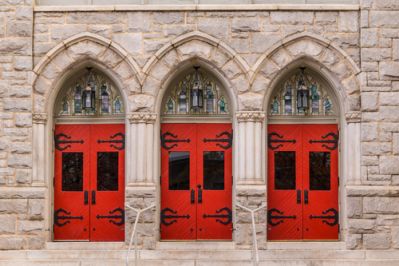 The differing views held by conservative, centrist, and liberal factions of the United Methodist Church with regard to LGBT policies and practices appear to be coming to a head. At a St. Louis UMC conference in February, delegates voted 438–384 to accept what’s been termed the “Traditional Plan.” This plan seeks to strengthen current bans against LGBT UMC pastors and against the performance of same-sex marriages in UMC churches.

The LGBT policy disagreement has been simmering within the United Methodist Church for years. Now members on both sides of the issue are calling for a break-up of the UMC, America’s largest mainline Protestant denomination. Born out of the 1968 merger between The Methodist Church and The Evangelical United Brethren Church, the UMC today boasts 12.6 million members worldwide, including about 7 million in the United States.

Not surprisingly, most of the US-based delegates to February’s conference opposed the Traditional Plan, but were outvoted by a combination of delegates from African and Philippine UMC strongholds and delegates representing the more conservative element of the UMC in America. Nevertheless, the closeness of the 438–384 vote shows how nearly 50/50 the UMC is divided on LGBT policies and practices.

Many of the UMC’s centrist members, as well as virtually all of its liberal members, fervently believe that the time has long since come for the UMC to adopt far more liberal LGBT policies and practices. In fact, many UMC churches throughout the US, including the largest one, the 22,000-member Church of the Resurrection with four locations in the Kansas City area, have raised rainbow flags in front of their building so as to show their congregations’ support for LGBT inclusion.

Resurrection’s lead pastor, Adam Hamilton, admits that his church is applying financial as well as political pressure. So far this year, Resurrection has withheld 50% of the $2.5 million it ordinarily would have paid to the head office of the UMC. According to Hamilton, Resurrection is not refusing to send in the payments due, it’s merely delaying them in an attempt to show how much the UMC would be impacted if Resurrection chooses to leave the UMC fold.

Conservative UMC members still hold a slight edge over the liberals. Nevertheless, even such people as Scott Jones, bishop of the UMC’s conservative Texas conference, are worried about the possible break-up of the UMC church. Jones holds out hope that somehow the UMC’s disparate factions can come to some form of agreement. In the meantime, he’s asking his Houston-based flock to “love each other, listen to each other, and respect each other, even if we disagree.”

Less optimistic conservatives, including Mark Tooley, head of a conservative Christian think tank, predict that the UMC will split into three separate denominations as follows:

The Traditional Plan seeks to beef up disciplinary measures that could be used against pro-LGBT clergy and congregations that defy the UMC’s policies against gay marriage within the UMC and LGBT pastors in UMC pulpits.

It appears that UMC members are considering two main options at this point. The first would be for all liberals and centrists desiring to do so to leave the UMC en masse and form their own new denomination. The other would be for Traditional Plan opponents to remain in the UMC but continue to resist from within, the goal being to convince the conservatives that they should be the ones to “graciously exit” the UMC.

Whatever ultimately happens, there’s no denying that today’s United Methodist Church is a church in crisis.