Many feel for the economy to recover, it will need divine intervention. Here are three religion's answers. 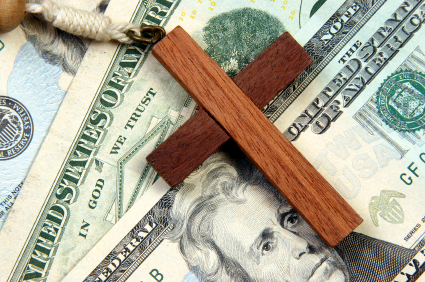 While some would say the government has done nothing to turn the economy around, others would maintain that solid efforts have been thwarted. Bickering of this nature could, and may, continue long into the generations to come and it leaves layman wondering, "Is there anything I can do"?

Depending on your system of belief, this answer may vary and depending on the severity of your situation, you may want to try them all.

A Buddhist response to the crisis: Approach the crisis with mindfulness and earnestness, rather than despair. Focusing not on the past, but on the future, it will be important to separate one's actual self from one's situation.Ã‚ In this, one can find peace.

An actual Buddhist response to this economic crisis, or a prescription for behavior that is, will be much harder to discern. Being mindful of oneself will remove one from suffering, this will include a suffering pocketbook. Ã‚ Cash is merely a false sense of security.

A Christian response to the crisis:Ã‚ Prayer, however one must pray not demanding an outcome from God, but pray from a place that is willing to listen. It is always important to remember that both God and His Son asked their flock to not worship idols and to care for the poor. The wealth of a past age is only a distraction, for it was not earned by you but given to you by God. Placing your faith in the Lord ensures that you will be cared for.

Additionally, when praying and asking God to help ease economic suffering, it will be important to ask forgiveness for seeking a career and material wealth before seeking God, which was the case for many.

A Wiccan response to the economic crisis:Ã‚ provided that you adhere to the Wiccan Rede, a witchcraft code of conduct that asserts spells are not used to manipulate or dominate others, then it would be fine to cast a spell of employment or prosperity on oneself. Wiccan money spells even. Always remember the Threefold Law when considering a spell, all effects (be them good or bad) will be returned to the one that cast the spell threefold.

Green is the color of prosperity, and a spell meant to augment it would involve fruits and vegetables, which can be considered signs of nature's prosperity. The spell can be as simple as chanting and writing your needs onto a piece of paper that will be burned. Repeating this over the course of three days, provided your intentions are pure, may result in having one's needs met.

It is always important to remember that sometimes the answers to prayers and results of spells may not always manifest exactly as one imagined.

At the ULC Ministries, we would love to see that all of our ministers and members are cared for in these troubling times. Whether it is by starting your own small business or merely engaging in fellowship with fellow ULC members, there are many resources, including information about getting a legal online ordination at TheMinistries.org.