The Search for the Science of Spirituality 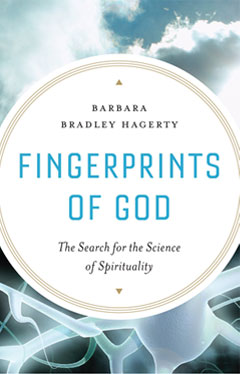 This nonfiction work by Barbara Bradley Hagerty explores the connection between the physical and the spiritual. Bradley Hagerty, a correspondent for NPR, attempts to answer the fundamental questions regarding the link between the natural and the supernatural. She uses the metaphor of fingerprints to describe spiritual encounters, claiming that like a fingerprint left behind on a surface, a person's body shows permanent signs of spiritual encounters, even after they occur. She writes from her experiences growing up in a Pentecostal church, and working with and learning from people who have had significant religious experiences in the past.

In her book, Bradley Hagerty, discusses the parallel between spirituality and science by taking an analytical perspective on her religious experiences and the experiences and testimonies of others. She sets the book up in a series of sections that alternate between in-depth analysis and discussion and narrative-like stories of others who have had monumental religious encounters, whether it be an apparition from God or a healing ceremony at the hands of Pentecostal priests. She reports in a manner that makes readers feel like they are there with her, watching miracles happen and sitting next to witnesses as they give their accounts of religious experiences.

For example, the 3rd chapter, The Biology of Belief, profiles Mary Ann Bradley, Bradley Hagerty's mother. This chapter begins with a description of Bradley Hagerty, and goes on to give a background of her faith and family history with Christian Science, the faith that she grew up with. It goes on the tell the story of Sheri Kaplan, who at 29 was diagnosed with HIV, but almost a decade later, had never shown any symptoms of the virus. She credits her miraculous condition to believing that God had a plan for her, and it was not to die a horrendous death, but to help people, and to go on with her life. Along with this claim, is a scientific backing supported by a study conducted by Gail Ironson, a scientist trained at Harvard. She found that among the HIV-positive patients that she dealt with over the years, the ones that had a positive outlook and a strong faith in God fared far better than those who had no beliefs and quickly became depressed. She ultimately released her findings: "Turning to God rather than rejecting God appears to boost your immune system and stave off the disease nearly five times as effectively." (Bradley Hagerty 53).

This astonishing conclusion is one of many cases and studies that Bradley Hagerty discusses in Fingerprints of God. The theme that becomes apparent after a few chapters is her knack for story telling that appeals to readers of all spiritual and emotional levels.

One review claims, "With honesty, humor, grace - and an enormous amount of reporting - Barbara Bradley Hagerty takes on one of the fiercest controversies of the last five hundred years: Can we measure faith? Fingerprints of God reads like an elegant mystery story as Bradley Hagerty launches a search for evidence of God within us and the universe as a whole. People of faith and science will be grateful for the chance to join her on her quest."

Along with this review and ones like it, there seems to be a common thread: can a connection between the spiritual and the scientific be proven? If so, how could a connection be proven, using today's technology? Does faith have the power to heal physical illnesses? Is there room for science in the religious realm, or vice versa? Do you have any personal experiences that lead you to believe one way or another?

Feel free to comment on the questions above or your impression of Fingerprints of God. The Universal Life Church Ministries appreciates any and all feedback to Bradley Haggerty's book, which is available at our website. The ULC Ministries also encourages all of those who became pastors online in its online ministry to read this book or books like it to expand their spiritual horizon.

get ordained
Log-in to track new comments this blog post.