The Good Samaritan in Pop Culture 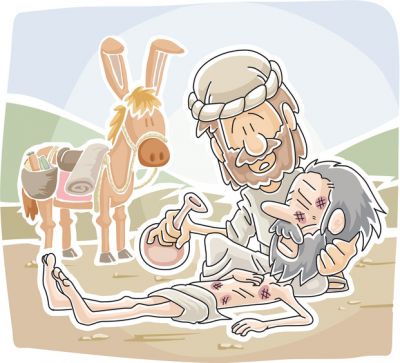 In Luke 10, Jesus tells the parable of the Good Samaritan. A parable illustrates a moral lesson, much like a fable or allegory. In this instance, it’s introduced when Jesus is asked the question, “Who is my neighbor?” Jesus tells this parable. A traveler is felled by robbers on the road from Jerusalem to Jericho. The traveler, presumably Jewish, is stripped, beaten and left for dead. A priest who traveled the same route saw the man, but instead of helping him, the priest walked on by. Another man, a Levite, saw the traveler, but did nothing to help him. Finally, a Samaritan came by, saw the man and took care of him.

To put this in historical context, the road that the men traveled on was known as the “Way of Blood.” It was a dangerous route. The priest and Levite may have been concerned for their own safety in helping the man. In addition, these men had to keep themselves ritually clean. Not only was it taboo in Jewish culture to make contact with a dead body, but also both of these men had temple duties.

The Samaritans and the Jews hated each other. Tensions between the two cultures ran high, even though Samaritans claim to be descended from the tribes of Joseph, as do the Israelites. Jesus is addressing the Jewish people in his parable. He decries the cultural norms of the time. The parable ends with Jesus asking the question, “Who among the three seemed to be the neighbor of the traveler who was attacked by robbers?”

This parable is one of the most represented stories in art of the past. Both Rembrandt and Vincent van Gogh have beautiful renditions of the parable. Van Gogh’s piece has similar brush strokes to his most famous painting, “The Starry Night.” His original “The Good Samaritan” hangs in the Kröller-Müller Museum in Otterlo, Netherlands.

It’s fairly easy to recognize the parable in literature once you think about it. In “Les Misérables,” Jean Valjean robs a parish priest. The priest not only covers Valjean’s crime to the police, but also offers Valjean more. It is this act of kindness that transforms Valjean into the hero. Valjean becomes the Good Samaritan himself, helping other characters in the story.

“X-Men: First Class” gives another example of the Good Samaritan. Charles Xavier offers food and a place to stay to Raven Darkholme, a young girl who is hungry and homeless. The relationship between them is complex. Raven seems to owe Xavier a debt, but their philosophies are quite different. But without Xavier’s generosity, would Raven be the character she is today?

In “Groundhog Day,” Phil continues to add good deeds to his daily activity as he accepts the loop he is in. He becomes a changed man, wins the girl and escapes the loop. He is the Good Samaritan in his story, making a person wonder what happened to the Good Samaritan in Jesus’ parable. Did his town love him or was he treated with disdain for helping an enemy?

Henry Lawson, an Australian poet and short story writer, penned a poem in recognition of the Good Samaritan. It’s a rather lengthy ode about the man who tended the traveler, but it’s worth reading. One stanza reads:

He was no Christian, understand,

For Christ had not been born—

He journeyed later through the land

To hold the priests to scorn;

And tell the world of “certain men”

And preach the simple creed again—

Consider that the man in Jesus’ parable did not have Christian ethics, but he was the neighbor that we should strive to be. Be the Good Samaritan in your community.