Take an Adventure to a National Park 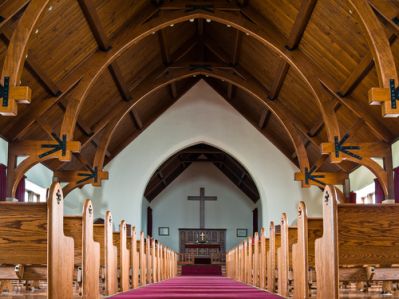 August is usually the last month before school gets into full swing, making it the perfect month for a weekend road trip or even an entire week of vacation. The National Park System offers many excellent opportunities for adventure and fun. Many people don’t realize that hidden within the mountains, deserts and forests are some beautiful historic chapels that are set amid spectacular views. Here are just a few of the best chapels and churches found in national parks.

Mammoth Chapel is the last existing building that was constructed during the era when the army was there. Its slate roof and oak furnishings are native to the area. The church wasn’t constructed until 1913, almost 40 years after the park was established. It’s the only church built in the United States that was constructed with public funds. It’s still in use today and is open to the public.

Yellowstone Park has many locations where religious services are held. If you’re in the park on a Sunday morning, it pays to check around for the schedule. There’s something very special about worshipping in nature. But even if you can’t attend a worship service, you can sense God’s presence in nature. Mother Teresa said: “We need to find God, and he cannot be found in noise and restlessness. God is the friend of silence. See how nature — trees, flowers, grass — grows in silence; see the stars, the moon and the sun, how they move in silence. . . . We need silence to be able to touch souls.”

The Episcopal Church founded this church to serve the workers and visitors of local dude ranches that were popular in the early 20th century. The congregation was founded in 1911, but this building wasn’t constructed until 1925. Four years later, it was incorporated into the park. Today, the chapel is listed on the National Register of Historic Places. It still holds Sunday services and is open for weddings.

This adobe chapel fits into the landscape of Grand Canyon National Park. It’s the only Roman Catholic chapel found in the park system. The facility might be Catholic, but people of all faiths are welcome. It is an active congregation with daily Eucharist celebrations, religious education for First Communion and other sacraments that are part of the Catholic Church.

The State of California commissioned this church in 1878. It was moved to its current location in 1901, but it’s the original building. It’s one of the most popular places to hold a wedding. To do so, you’ll need to reserve the chapel and obtain a special use permit from the National Park Service. The chapel also functions as an interdenominational facility, home to Yosemite Community Church. You’ll have one of the best views of Yosemite Falls when you visit the chapel.

There are three churches in this historical district, all preserved in good condition and semi-active in the community. The original town was fairly self-sustaining. The roads were difficult to travel. A trip to Maryville, the closest town, took three days. One day was spent traveling to town. The second day, the pioneers would sell and buy goods. The third day would be spent traveling home.

When the park was created, the town was completely isolated. Rather than abandoning the town, it was preserved as a historical location. Baptists formed a congregation in Cades Cove in 1827. The Methodist Church has roots in the area as far back as the 1840s. You’ll have to walk throughout the town to see all three churches, but they’re within walking distance of the visitor’s center.