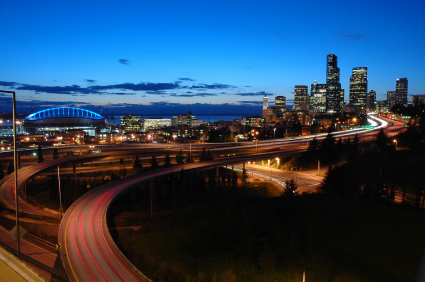 Thousands of Seattle residents are fleeing the city this week following the announcement of its imminent destruction. Not due to a natural disaster or terrorist attack, but as a direct result of the wrath of God himself.

Startling news of the All Knowing Lord and Creator of the Universe's plans to obliterate a major American urban center first broke on Monday. John Smith, who is set to fully become ordained as a minister of the Universal Life Church (ULC), held a press conference to announce what has been described as a "surprisingly accurate" reinterpretation of the book of Revelation. "Part of the book of Revelation describes the destruction of a city built on seven hills that sits on many waters," said Dr. Ralph Waldo, a minister of the Universal Life Church for six years. "Traditionally, it's been thought that this meant Rome. Mr. Smith, although he hasn't yet technically fully become ordained by our church, has pointed out some vital flaws in this theory and actually pinpointed a much more accurate location."

Inaccuracies hinting that Rome may not be the All Seeing God's target include the fact that Rome sits on almost no water. On the other side of the world, Seattle is virtually underwater, due to its location on Puget Sound and its many lakes and rivers.

Smith could not be reached for comment and has not returned calls. An assistant stated that the minister was busy performing a wedding, an increasingly common occurrence since the apocalyptic news stirred widespread panic within the city. "Of course he was performing a wedding! Every time people get bad news like this everyone seems to feel the urge to get hitched," said Debbie Morales, a clerk for the city of Seattle. "I saw the same thing during Y2k, and boy are some of those poor couples regretting that rash decision!"

While some are having shotgun weddings and squaring away personal affairs prior to fleeing for their lives, other Seattleites appear to be simply jumping on the band wagon. "I don't know, man. My boss high tailed it out of town at the first scent of danger," said Jason McCollins from the driver's seat of his 2001 Geo Metro while trapped in gridlock due to the high volume of residents fleeing simultaneously. "I guess I don't have to be at work anymore. If my worst case scenario is death by fire and brimstone, I suppose I might as well play it safe and leave. Let's just hope God doesn't destroy us before I get out of this traffic jam!"

Authorities from the ULC have been reluctant to fully embrace Smith's theory. The world's foremost experts on doom and gloom, the Catholic Church, were also hesitant to respond, citing their current lack of a CEO and spokesman.

At press time, God could not be reached for comment.

Note: This post is tongue-and-cheek and not meant to be taken at face value. We know that prophecy plays an important part in Christianity, but it shouldn't be something we spend our time trying to figure out; the Bible says that the second coming of Jesus will be like a thief in the night, so no manner of interpretation will yield any secrets on the matter and any attempt is just as silly as this article. Besides, the message and worth of Christianity is not in trying to solve the riddles of Revelation.