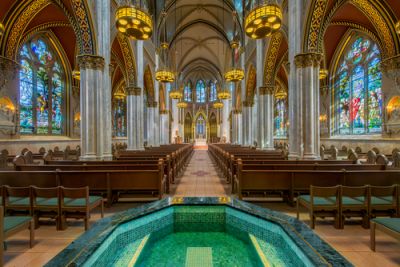 Montana is the only state with a constitutional mandate that recognizes the cultural heritage of the American Indians and commits to preservation of their cultural integrity. Students from Kindergarten through 12th grade are taught about Native American culture, history and heritage. Montana’s recent slogan was “The Last Best Place” and the state is known as the “The Treasure State.” Tourism is a rapidly growing industry in the state, and not just for Glacier National Park, Yellowstone National Park and Little Bighorn Battlefield National Monument. Here are some of the historic scared sites for Native Americans and people of other faiths.

This labyrinth opened to the public on New Year’s Eve 2000. It’s a 108-foot labyrinth made of 25 tons of local rock. Patty Meyer, a local resident, built the labyrinth on her property as a place of possibilities. It’s a scared space where you can reconnect with the earth and your own spiritual beliefs.

This sacred mountain of the Blackfoot Indians transcends boundaries between the United States and Canada. The mountain belongs to all of the Blackfoot People, whether they live in Canada or the U.S. It’s a place where powerful and significant visions are obtained by fasting and prayer. The mountain has been used in rituals and for ceremonial purposes for thousands of years. It is a sacred area.

This small group of mountains rise about 6,000 feet above the surrounding plains. In 1872, the hills were the site of a battle between Native Americans and wolf hunters. The mountains are a sacred site to the Blackfoot People.

This Gothic Revival church held its first mass in 1914. It was modeled after a church in Vienna, Austria, and really stands out in the capital city. The stained-glass windows tell the Christian story, beginning with the fall of Adam of Eve. The twin spires stand at 230 feet. The exterior of the church features 29 statues of saints and other prominent Christians.

This congregation began in 1879, but there weren’t enough people in the area to warrant a church building until 1885. By the early 1900s, the first church building was too small. A new church was dedicated in 1908. This church was made of local stone, Hebron granite brick. The tower rises to 102 feet. It’s been well-cared for and still looks beautiful, even though it’s over 100 years old.

St. Mary’s is the first permanent settlement made by the Europeans in what is now the state of Montana. It was founded in 1841. The chapel has been restored to remember the Jesuit pioneers in Montana. From April to October, the complex is open for tours. You’ll see art and artifacts from the early settlers of Montana at the buildings that sit on the site.

This pan-Orthodox congregation has members that are Greek, Serbian, Irish, Scottish and German. It held its 100th anniversary in 2004, but the first Divine Liturgy was served in 1897. The first permanent structure was built in 1905 and had to be demolished in 1964 due to structural damage. The exterior of the church is amazing, but the inside frescos are stunning. Six artists from Belgrade, Serbia, painted the frescoes, which have to adhere to the teachings of the Orthodox Church. The artists cannot express themselves through their work.

This museum provides historical context for the Ursuline Academy and convent. The Ursuline Academy began as a girl’s only school but opened its classes to boys a few years later. You’ll find artifacts and art from Native Americans and the sisters, which demonstrate how they lived and served the people of Montana. Schedule a tour to ensure availability.