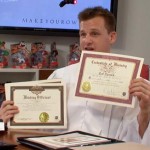 For those who missed it the first time around, the episode of Rob Dyrdek's Fantasy Factory that featured the titular character performing his sister's wedding ceremony in Los Angeles, California aired again last night in an eight-episode re-run marathon on MTV. Dyrdek, a former professional skateboarder and entrepreneur, became ordained through the Universal Life Church Ministries in 2009 and was able to bind his sister and her fiancee in holy matrimony using our online ministry's services. The ULC Ministries staff loved the episode because it gave us the opportunity to watch one of our pastors officiate a ceremony; we, unfortunately, see far too few of them (hint hint Seattle-area ministers). Test test test.

People - ULC ministers and laypeople alike - who are interested in officiating wedding ceremonies for themselves in California can do so with relative ease. The state's wedding laws are mercifully lenient in that county clerk's offices only need an ordination credential certificate to verify ministers' ordination statuses when they are filing for marriage licenses. But, as per usual, you shouldn't rely on the above information; always make sure to call the county clerk's office of the county you are planning on performing a wedding in and ask the county clerk what documentation you will need to have in your possession in order to file for a marriage license; order ministry products and documentation from us based on their answer. Those who are not yet ULC ministers should know that they need to be ordained before they can legally officiate a wedding ceremony - both in California and the other 46 states which accept our ordination.

Our ministers can watch the full episode of Fantasy Factory on MTV.com here.