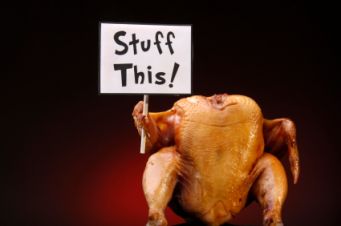 Right-wing fundamentalist Pat Robertson has been known to say some downright odious things on behalf of his faith. No doubt many of our own ministers ordained online are familiar. Recently he said that divorcing a spouse with Alzheimer's disease is justifiable, but his suggestion that God caused the Haitian earthquake to punish Haiti for making a pact with the devil probably takes the cake. Now, in a jaw-dropping show of ignorance, the evangelical ideologue has suggested that eating macaroni and cheese is "a black thing".

Robertson made the suggestion on a recent episode of his Christian talk show The 700 Club following a clip in which his black co-host Kristi Watts interviewed former U.S. Secretary of State Condoleezza Rice. During the interview, Watts asked Rice what type of dish she had to have on Thanksgiving. Rice responded, "macaroni and cheese", to which Watts rejoined, "Sister, that is my dish...!" After watching the clip, Robertson asked his co-host, "What is this mac and cheese? Is that a black thing?" Without missing a beat, Watts replied, "It is a black thing, Pat! It is a black thing. And listen, you guys, other people, the world needs to get on board with macaroni and cheese."

While such a comment may seem like a small faux pas, it serves to illustrate just how oblivious older generations are to the scruples and sensibilities of younger people (not to mention most ULC wedding officiants). That the comment has received so much attention in the media attests to this fact. Youtube now features multiple videos by young, often black Millennials and Generation X'ers asking Robertson, "Really? Seriously? Have you never heard of Kraft Macaroni & Cheese Dinner before? Is it really so foreign to old white people like you?" with the obvious suggestion that Robertson's cerebral cortex is wholly and utterly disentangled with reality. Almost as astonishing is Watts's unhesitating avowal that macaroni is, indeed, "a black thing", forcing one to wonder whether the co-host is simply "sucking up" to her elder white male colleague in a display of sycophancy.

Random tidbits like Robertson's "mac and cheese" comment, as well as the social media's response to it, begin to seem symbolic of a disjuncture or "disconnect" between elders detached from the changing social reality on one hand, and more socially integrated, down-to-earth younger generations on the other---including a lot of people who get ordained online. And there is mounting evidence to support the contention that older religious figures like Robertson, who represent a shrinking segment of the American population, struggle to make sense of the increasingly pluralistic world around them, making the occasional impolite gaffe as they wrap their heads around complex racial and sexual themes. Recent findings by the Pew Research Center on politics and generational differences found not only that Americans are becoming less religious with each successive generation, but also that support for church-state separation is growing. The suggestion is that younger generations are distancing themselves from the social conservatism and maladaptive traditions of older generations. "What do I make of these two black women talking about macaroni and cheese?" Robertson seems to be thinking. "Well, they both have dark skin, and they both like macaroni and cheese, so macaroni and cheese must be something which black people like". Even though plenty of white people eat macaroni and cheese all the time. The naivete behind such a thought process almost provokes pity in the observer.

A History of Controversial Remarks

It will be entertaining to see what sort of odd ideas about race, sex, and the social landscape Robertson hatches in the future, and all of the weird associations he makes in order to explain people he doesn't understand very well. Little things like Robertson's "mac and cheese" gaffe, when taken together with claims like God punished Haiti with an earthquake for making a pact with the devil, or divorce is justifiable if a spouse has Alzheimer's disease, paints the portrait of a mind characterized by senility, prejudice, and a desperate reliance on tradition fuelled by a fear of growing diversity. Of course, we at the Universal Life Church Ministries watch on at Robertson's antics with a mixture of amusement and concern, for, after all, our motto is that we are all children of the same universe, and such crass, flippant, thoughtless stereotyping does little to create a sense of solidarity. Alas, at the end of the day, the poor man probably didn't mean much by his statement, but still, associating a generic comfort food dish with black people because two black people happen to like it is just an example of the very type of race-conscious foolishness which makes younger generations roll their eyes.

As a ULC minister, what do you think about Pat Robertson's comment? Is it just typical, harmless, ignorant old Pat, or is it potentially damaging? Source: CBS News Pew Research Center for the People and the Press