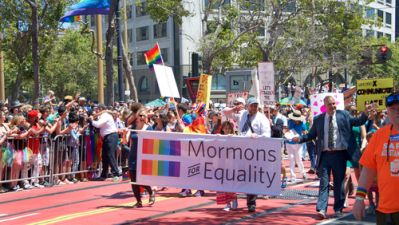 In a stunning move on April 4 of this year, The Church of Jesus Christ of Latter-day Saints, commonly known as the Mormon Church, announced that it will now baptize the children of LGBT parents. This new policy reverses the church’s previous stance, as enunciated in its controversial — some would say infamous — 2015 edict forbidding such baptisms unless the child was at least 18 years of age and had denounced his or her parents, renounced same-sex marriage, and moved out of the parents’ home.

The new policy, announced at the church’s annual conference, allows these children to be baptized at the age of eight, the customary baptismal age for Mormon children, on the condition that their parents know and approve of the fact that their children will be taught church doctrine, including its historical and continuing opposition to homosexual relationships.

The LDS Church is the fourth largest Christian denomination in the United States and boasts over 16 million members worldwide. Its teachings emanate from four sources:

Since its inception by Joseph Smith in 1830, the LDS Church has always seen homosexuality as a sin. However, Mormon doctrine has long distinguished between same-sex attraction and same-sex behavior. Current policy holds that same-sex attraction itself is not sinful, since those who feel it do not choose to feel this way, but acting on those feelings constitutes a sin.

This policy did not change with the new April stances. While the church holds that therapy that attempts to change a person’s sexual orientation is unethical, it still nevertheless states that people who act on their feelings of same-sex attraction have disobeyed its moral teachings and therefore may be subject to one of the following forms of ecclesiastical discipline:

The LDS Church allows ordination only of men, and then only for those who are not openly gay, bisexual, or transgender. Women have never been allowed to be ordained, and little hope exists that this policy will change any time soon.

Same-sex marriages have been legal in Utah since 2014 when a federal court declared the state’s same-sex marriage ban unconstitutional. Surprisingly, top LDS leaders worked side by side with Utah lawmakers and LGBTQ advocates in 2015 to pass the state’s Equality Act that protects sexual orientation and gender identity in both housing and employment. Despite such participation, however, the church itself has yet to take an official position on the Equality Act.

The LDS Church is not the only Christian denomination dealing with LGBT issues. Leaders and members of the United Methodist Church are embroiled in a huge LGBT policy brouhaha, which many fear will result in the church officially splintering into two or more religious groups.