Join the Movement to Prevent Bullying 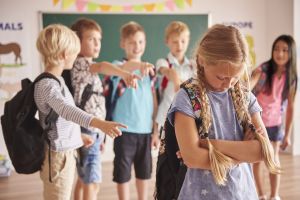 According to stopbullying.gov, bullying is defined as "unwanted, aggressive behavior among school aged children that involves a real or perceived power imbalance." It's estimated that about 20 percent of all students are bullied on school property, disrupting the education process and making school feel like an unsafe place for thousands of children. October is recognized as National Bullying Prevention Month. Learn more about bullying and what you can do.

Bullying typically takes on one of three forms:

Verbal bullying can include teasing, name-calling, taunting, inappropriate sexual comments and threats to cause harm. Social bullying is about hurting a person's reputation or relationships. For example, it might be leaving someone out on purpose, spreading rumors about someone or embarrassing someone in public. Physical bullying is probably the most overt form of bullying. It can include, spitting, hitting, kicking, tripping or pushing someone. Making rude hand gestures or breaking someone's possessions are also forms of physical bullying.

Bullying occurs on campus and off campus. It is a community issue, not one that children grow out of. When you consider that one out of every five students is bullied, chances are you know someone who is being bullied. Bullying doesn't affect the targets alone. Witnesses can feel helpless and unsafe, believing that they may be the next target.

Every child needs to feel safe and supported to be able to learn. Studies have proven that bullying directly affects a child's ability to learn. Students who are being bullied can find it difficult to concentrate and often have a decline in grades. They lose self-esteem and self-confidence. Many students report physical symptoms, such as headaches or stomachaches due to bullying. Bullying can lead to mental health issues, depression and anxiety, which can take years to overcome without immediate treatment. In some cases, bullying has been a catalyst in school shootings or suicides.

We can no longer simply ignore bullies. In the past, silence was an acceptable response, hoping that the bully would stop when he or she didn't get any response. Teachers and students often overlooked the behavior, thinking it was a rite of passage. Fortunately, we know better today. There are many effective methods of dealing with bullies. Peer intervention often stops bullying, but many students don't feel as if they can step in when someone else is being bullied.

The Anti-Defamation League offers 10 ways to respond to bullying:

Remove yourself from the situation. Tell the aggressor to stop. Be calm, but firm. Control your emotions. Anger can fuel the situation, so keep cool. Don't fight or respond to the bully by bullying. Two wrongs do not make a right. Tell a friend after the incident. Having support can make you feel better about talking to an adult. Report the bullying to an adult. Some kids are concerned that they might be tattling, but silence does not help the situation. Look for safe spaces. Surround yourself with trusted friends or classmates. Practice your response to bullying. Don't give up if you aren't successful the first time, but keep practicing to gain confidence when bullying does occur. Express your feelings in a diary or journal. Draw a picture or write a story. Find ways to occupy your time that are positive and make you feel good about yourself. Spending too much time alone can often heighten the anxiety you feel when dealing with bullies.

Adults Are Bullies, Too

We'd like to posit that bullying doesn't only occur among school-aged children, but among people of all ages and backgrounds. Even as adults, it can be difficult to stand up to a bully. However, your bully isn't going to just go away. You, too, have the power to prevent bullying, but you have to be strong, set boundaries and find ways to defuse a bullying situation without aggression.