Is Precognition for Real? 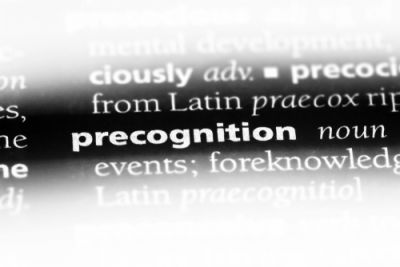 We’ve all had the experience. Something tells you that your child is in trouble and you race out into the back yard to discover him or her in the process of falling off the swing and scraping a knee. The youngster hasn’t yet had time to open his or her mouth and scream out for you. Or something tells you that your BFF is about to call you, and sure enough, your cellphone rings and it’s your friend on the other end of the line. Or you’re at work, sneaking in a quick game of online solitaire when you’re supposed to be finishing up that blasted quarterly report. Suddenly something tells you that you need to close out the game, bring up that report, and get back to work. Seconds later, your boss walks through your office door.

What’s going on here? Have you just experienced precognition, the ability to anticipate a certain event shortly before it happens? According to the findings of a new study, you may well have.

When we talk about precognition, we’re not talking about people like Nostradamus or your local fair gypsy fortune teller who claims to have the ability to predict the future. No, we’re talking about you and every other common ordinary human being having the ability to react physically to a trigger sent by your subconscious with no sensory clues whatsoever.

Stories about precognition abound throughout history. Some people call it intuition. Others call it a form of vision. Still others call it instinct, while some insist it’s a revelation from God. Most just call it an unexplained phenomenon common to all of us. But now, based on a new meta-study of 26 studies conducted between 1978 and 2010, the phenomenon has a new, more scientific name: anomalous anticipatory activity, meaning the following:

In other words, according to the study, human beings can subconsciously anticipate events even though we cannot consciously express why.

The team of neuroscientists who conducted the meta-analysis, the results of which were published in Frontiers in Human Neuroscience, stop short of calling predictive anticipatory activity (PAA for short) true human precognition. However, they call PAA the "predictive physiological anticipation of a truly randomly selected and thus unpredictable future event" and note that it “appears to resemble precognition (consciously knowing something is going to happen before it does).” They also note that such things as questionable research practices, expectation bias, and physiological artifacts (activity generated by participants’ bodies that can affect brain scans) cannot account for the existence of PAA. Their current working hypothesis is that “quantum processes are involved in human physiology or that they reflect fundamental time symmetries inherent in the physical world.”

To even begin to understand precognition, we need to understand time. After all, precognition involves predicting something that will happen in the future, albeit the very near future. Understanding time, however, is far easier said than done, and in fact seems to be more difficult instead of less so the better our science and our knowledge becomes. For instance, consider the following:

All of these put the concept of time into greater disarray. And there’s also the age-old question: Are we moving through time or is time moving through us? But despite the overarching questions about the nature of time itself, it appears that scientific researchers are interested in further studying the precognition phenomenon and have been for quite some time.