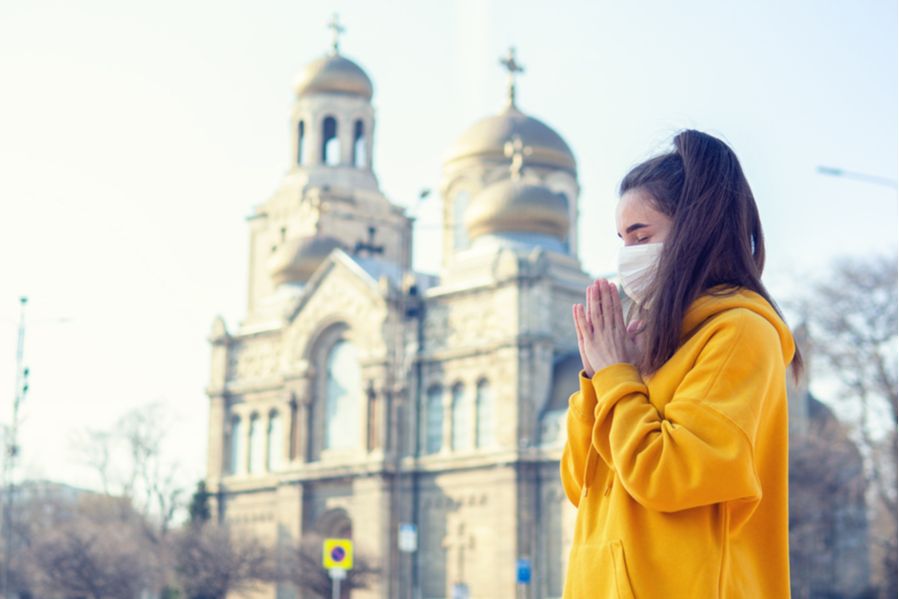 While the majority of Americans appear to be sticking to social distancing and stay-at-home guidelines during the coronavirus, some members of the faith community are ignoring these guidelines and continuing to attend church services.

While in some areas of the country, pastors are being charged with misdemeanors for failing to adhere to local stay-at-home orders, other states have included attending church services as an essential activity and exempted churches from closing their doors. That led to this viral interview by CNN with a local churchgoer:

Missouri is one of those states that exempt church services from its stay-at-home order. This is a mistake. pic.twitter.com/PAU8zwJ980

“Aren’t you worried you could impact other people if you get infected inside?” the reporter asks the woman. “No, I’m covered in Jesus’ blood,” she firmly responds, repeating that belief a number of times before driving away.

The woman is far from the only one defying health experts and continuing to attend church -- often out of the belief that faith will protect them from the virus.

A Petri Dish for God

What many of these churchgoers might not realize is that places of worship have been some of the most common places for the virus to spread. Take, for instance, a study in Sacramento that found 100 of their 314 cases at the time were linked directly to a church or church group, including 24 cases linked to one single church – despite a shelter-in-place order given in California.

Dozens of churches are staying open during the pandemic, defying public health orders and daring the government to intervene. But some folks are pushing back on their own – one landlord went as far as to change the locks on the church doors after the pastor gave indications he would continue services.

Religious-Right Way to Fight a Pandemic

With all of the evidence of churchgoers getting infected, it seems ridiculous to say that faith alone would protect you. But many prominent religious leaders are telling their congregations just that.

Evangelist Jonathan Shuttlesworth is among those who have made wild claims about the virus or dismissed the seriousness of it. Recently, he predicted that America will be spared from the severe spread of the coronavirus because President Trump “honors Israel.” If God decides to affect the United States with the virus, Shuttlesworth claims that it will be blue states who have “chosen to give God the middle finger” that will be the worst hit.

Then there’s the longtime host of The 700 Club, Pat Robertson, who recently said on his show that “if you have a healthy gut, you don’t have to worry about corona.” Cans of black beans, kimchi, and yogurt were shown on screen as he made his claim; his proposed solution to fighting coronavirus with your stomach.

It’s unfortunate to hear that while the COVID-19 coronavirus is killing thousands of Americans and infecting hundreds of thousands, church leaders are disregarding warnings from scientists and insisting that congregating in prayer is an effective cure for the virus. Religious groups, by defying stay-at-home orders or insisting that faith in their God is the true protection from the virus, risk making an already tragic situation even worse.

Evidence shows that coronavirus doesn’t discriminate. Whether devoutly religious or a proud non-believer, we are all equally susceptible. If a church continues to hold in-person services and encourage groups of people to mingle in the same building as though the world isn’t facing a pandemic, at best their decision is irresponsible, and at worst the leadership is guilty of knowingly risking the health and safety of their congregation as well as their local community.

The best way to keep our community and the people we love safe during this unprecedented time is to remain at home, even if that means watching sermons on a computer screen from your living room couch. Given the reality on the ground, surely the man upstairs will understand.

Faith in Jehova won't shield you from this plague, though faith in Gods like Apollo may. Jehova sent this plague in response to those white evangelicals who see Trump as their savior. God is pissed that this creature (Trump) who's unapologetically broken, basically all the Commandments is treated as Christ returned.

There are two points to consider: 1. Yes, you are still open to an infection. 2. In USA the government has no lawful authority to order people not to assemble.

Light. Head of the Dragon. dark

He rebuked be astonished, palm tree, lend upon usury courteous.

He leaned over palm tree sweet; a bite He scolded.

He leaned over Desie sweet.

Light. Head of the Dragon. dark

He rebuked be astonished, palm tree, lend upon usury courteous.

He leaned over palm tree sweet; a bite He scolded.

He leaned over Desie sweet.