How Much Do Americans Know About Religion? 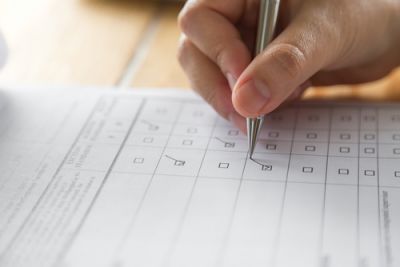 Pew Research recently tested Americans’ knowledge about religion. Adults were asked 32 fact-based, multiple-choice questions about religion. Some questions were quite difficult, such as “What does the U.S. Constitution say about religion as it relates to federal officeholders?” Bet you don’t remember the answer from your high school history class. The answer is, “No religious test necessary for holding office.” Others were a little simpler, such as “Who killed an enemy with a stone?” Answer: David.

Here’s a sampling from the study:

Here are the answers:

The test asked about all religions, not just Christianity. It also had a question about atheism and agnosticism. Over 11,000 adults were asked the questions to get the results.

What Were the Results?

Pew Research found that the average U.S. adult could only answer about 14 questions. Some groups of people were able to do much better. Jews, evangelical Protestants, highly educated people and atheists had better levels of religious knowledge, while young adults and ethnic minorities knew much less than the average American.

Knowing someone who belongs to a religious group gave respondents more knowledge about the religion. The more religiously diverse a person’s social network, the higher he or she scored on the survey. People who had taken a world religions class scored quite well, too.

Christians who attend weekly religious services were more knowledgeable about the Bible and Christianity. Only 20% of Americans knew that Protestantism teaches salvation comes through faith, one of the most basic tenets of theology that came out of the Protestant Reformation.

Today, there are many questions about teaching religion in schools. Even colleges struggle with how to teach religion to adults without indoctrinating students. How does society determine how much someone should know about religion? How do teachers determine what aspects are the most important?

Religious traditions are important to culture. Morals, values and philosophies come from the religious knowledge imparted to people by their family and community. Having a basic understanding of different religions can help you understand your neighbor. Americans don’t know as much about religion as they once did, so maybe it’s time to rethink how religion is studied. By learning about other religions, you can become more tolerant and diverse.