Historic Churches in the Bold New City of the South 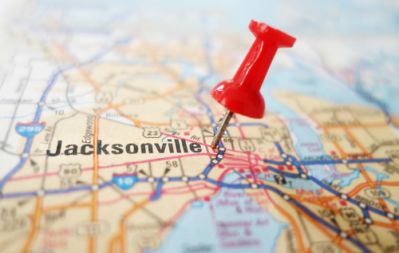 The tragic deaths that occurred at a Jacksonville, FL video-game tournament last month, shocked the country. It’s always heartbreaking to see anyone die, especially under such horrible circumstances. In addition to the two deaths, nine others were injured. The gunman killed himself. Witnesses who weren’t injured may need counseling to recover from the scene. The families of those wounded and killed will be forever affected. Thoughts and prayers go out to anyone grieving.

Jacksonville is a major regional business center in Florida. It’s not one of the first cities that people think about in connection with Florida, but it is a cultural center and military and civilian port. Jacksonville’s nickname is the “Bold New City of the South,” but it is one of the oldest European settlements in the continental United States.

Before the European settlers came to the area, the Timucua people inhabited the land. The French were the first colonials to settle in the region at Fort Caroline in about 1564, but Spain attacked the fort about a year after it was built to protect their position in the area. Over 200 years later, Spain would cede the land to the British, only for the, to cede control of the territory back to Spain after Britain was defeated in the Revolutionary War. Spain then ceded Florida Territory to the United States in 1821. Jacksonville was chartered in 1832, named after President Andrew Jackson.

Jacksonville has a diverse religious population, which includes Christians, Hindus, Buddhists, Bahá'ís, Muslims, Jews and Latter-day Saints. Many churches have stunning architectural features that date over 150 years. Here are a few of the most prominent historic churches in the city.

Basilica of the Immaculate Conception

This church is considered the oldest Catholic congregation in Jacksonville. Established in 1845, the first church building was destroyed by Union forces in the Civil War. The second building was destroyed in the Great Fire of 1901, which devastated most of downtown Jacksonville. The current building was dedicated in 1910. It’s a fine example of Late Gothic Revival architecture, complete with high spires, pointed arches and buttresses. It earned its designation as a minor basilica in 2013 and is listed on the U.S. National Register of Historic Places.

This congregation dates to around 1829, when the first Episcopal services were held in Jacksonville, but about 200 years earlier, Commodore John Hawkins held the first Anglican services in the continental United States when he read from the Book of Common Prayer from the deck of his ship. St. John’s was established in 1834. The architecture of the building is quite stunning, with winged gargoyles, Celtic crosses, arched windows and frog gargoyles. The stained-glass window collection is amazing, too.

This Romanesque Revival building houses one of the oldest African Methodist Episcopal churches in Jacksonville. The details of the building are unique, including art-glass windows, a bell tower and crenelated parapet. The congregation organized in 1866, but the current building wasn’t completed until 1905. The Great Fire of 1901 destroyed its second church, but the congregation didn’t waste any time rebuilding.

This church is the oldest Episcopal church that served people of color in the Diocese of Florida. Its architecture is Gothic Revival, which was very popular at the turn of the century when it was being built after the 1901 fire. Although the sanctuary was rebuilt after the fire, when services began in 1906, the church didn’t have windows or electricity. Instead of pews, churchgoers sat in straight chairs. They had to use lamplights to see. Over time, the church added features, such as an altar, gas heating, a pipe organ and more. But its real claim to fame is that it was the first documented work of Henrietta Dozier, the first woman architect in the Southern United States to receive formal training.